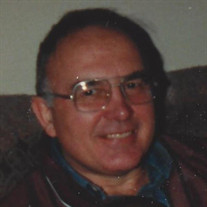 Walter J. VanSickle, age 85, of St. Clair, went home to be with the Lord on Thursday, June 17, 2021. He was born July 19, 1935 to the late John and Edna VanSickle. Walter married the love of his life, Carolyn on August 6, 1960. He proudly served his country in the United States Air Force during the Korean War. Walter owned and operated C & W locksmith. He also worked for East China School District for over 30 years. He was a member of Crossroads Community Church, China Twp. In his spare time, Walter was an avid gardener. He is survived by his wife of 61 years, Carolyn; children, Eric VanSickle, Cindy VanSickle, Julie (Vince) Pratt, Kristine (David) Schweihofer, Jana VanSickle; grandchildren, Jessica (Jeremy) Bailey, Amy (Kevin) Swinson, Sarah Cartwright, Olivia Pratt, as well as 10 great grandchildren. He is preceded in death by his grandchild, Parker Swinson, 5 brothers and 1 sister. A funeral service will be Monday, June 21st at 2:00 p.m. at L.C. Friederichs and Son Funeral Home, St. Clair. Interment at Hillside Cemetery, St. Clair. Visiting hours will be Monday from 11:00 a.m. to 2:00 p.m. a prior to the service at the funeral home. Memorials are suggested to Crossroads Community Church, China Twp. To leave a message of comfort visit www.lcfandson.com

The family of Walter J. VanSickle created this Life Tributes page to make it easy to share your memories.

Send flowers to the VanSickle family.