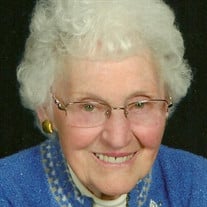 Velda M. Cleland, age 97, of St. Clair, passed away April 4, 2017. She was born on May 22, 1919 in China Twp. to the late Milton and Ruby Schunk. She married Wilson M. Cleland on May 27, 1939. He preceded her in death on February 17, 1994. She was a lifelong resident of St. Clair and First United Methodist Church, St. Clair where she taught Sunday school for 43 years. She was also a life member of the Eastern Star. At one time she was named Mother of the Year in St. Clair. She worked at Hayes clothing store in St. Clair for 43 years retiring at age 91. She is survived by her children; Judy Hawkins, Joanne Benedict, Jim (Barbara) Cleland, Debra (Patrick) Brinker, and Kathy (Larry) Williams. She is also survived by 12 grandchildren, 22 great-grandchildren, sister; Phyllis Behringer, brother; Bill Schunk, and many nieces, nephews, and friends. She was preceded in death by her brother; Kenneth Schunk, sister; Lois Eisen, and son in-law; Bob Hawkins. Services will be held at 11:00 a.m. on Monday, April 10 at the First United Methodist Church, St. Clair. Visiting hours will be Saturday from 5:00 to 8:00 p.m. and Sunday from 2:00 to 4:00 and 6:00 to 8:00 p.m. at L. C. Friederichs and Son Funeral Home, St. Clair and at church from 10:30 to 11:00 a.m. prior to the service. Interment will be at Hillside Cemetery, St. Clair. Memorials are suggested to the First United Methodist Church, St. Clair. To leave the family a message of comfort please visit: www.lcfandson.com

The family of Velda M. Cleland created this Life Tributes page to make it easy to share your memories.

Send flowers to the Cleland family.