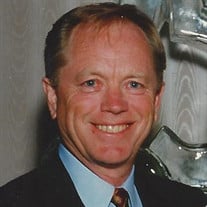 Tom L. Acton, age 77, of St. Clair, died peacefully on April 10, 2017, with his family at his side, following a courageous 11 year battle with dementia and Parkinson’s Disease. He was born November 29, 1939 in Sarnia, Ontario to the late James and Gladys Acton. On June 19, 1965 Tom married Linda Farrington in Port Huron. Tom was an active member and volunteer of many community organizations. He was a member of the St. Clair Harbor Commission, past president of the St. Clair Rotary Club, member of Community Foundation of St. Clair, former member of Academy for Plastics Manufacturing Technology, chairman of St. Clair Downtown Revitalization Committee and volunteered many hours at Kids in Distress. He was an avid boater and woodworker. Tom owned and operated Pine River Plastics in St. Clair for over 30 years. His family will remember the energy and passion he put into everything he did and the love he shared with his grandchildren. He is survived by his wife of 51 years, Linda Acton; children, Randy (Melissa) Acton, Paul (Deanne) Acton, Jennifer Bialek (Rick Burrough) and Sarah (Gary) Nolan; grandchildren, Morgan, Samantha, Maggie, Andrew, Aiden, Milly, Sawyer, Harper and Randie; siblings, James Acton, Sharron Saunders and Lyle (Jan) Acton; sister-in-law, Dorothy Acton and several nieces and nephews. He was preceded in death by a brother, Richard Acton. Funeral services will be Friday April 14th at 10:30 a.m. at L.C. Friederichs and Son Funeral Home, St. Clair. Visiting hours are Thursday 4:00 to 8:00 p.m. and Friday 10:00 to 10:30 prior to the service. Memorials are suggested to Kids in Distress. To leave a message of comfort, visit www.lcfandson.com

The family of Tom L. Acton created this Life Tributes page to make it easy to share your memories.

Send flowers to the Acton family.