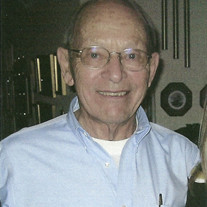 Stuart Haines Bogue, age 90, of East China died Tuesday, April 15, 2014. He was born on his grandparents' farm in Wabash County, Indiana on December 2, 1923 to the late Philip and Faye (Hains) Bogue. Stu graduated from Port Huron High School in 1941 and was drafted into the Army in 1943. After basic training, he went into the ASTP, the Army's Specialized Training Program at The Ohio State University. When the program was abolished, he was sent overseas, landing in Marseille, France and was a tank gunner all throughout Germany. After the war, he graduated from Michigan State University with a Bachelor's degree in civil engineering. He married Charlotte Campbell on October 15, 1949. Stu earned his Master's degree in civil engineering from The University of Michigan in 1951. He joined the firm of Pate and Hirn, a civil and consulting engineering firm and was later named president of the company, Pate, Hirn and Bogue. He and Charlotte were members of the NOMADS and enjoyed many trips together. Stu is survived by his wife of 65 years, Charlotte, son, James (Virginia) Bogue, daughters, Jeanette (William) Trefzer and Jennifer (Roger) Bick; grandchildren, James Bogue, Jr., Amy and Timothy Trefzer and Natalie and Nolan Bick. The youngest of three children, Stu was preceded in death by his sisters, Barbara and Miriam. Visitation will be held on Saturday, April 26 at St. Paul's Episcopal Church, St. Clair, from 10am until time of service at 11am. Private family burial at Lakeside Cemetery, Port Huron. In lieu of flowers, memorials may be made to Seasons Hospice in memory of Stuart Bogue or Habitat for Humanity. Arrangements by L.C. Friederichs & Son Funeral Home, L.C. Friederichs Funeral Home - St. Clair , MI

The family of Mr Stuart H Bogue created this Life Tributes page to make it easy to share your memories.

Send flowers to the Bogue family.