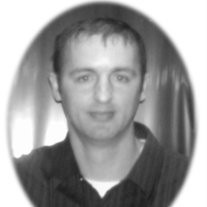 Scott Alan Lawson, born May 18, 1976, of Kimball Township, died unexpectedly Saturday July 27th. He was survived by his fiancée of 9 years, Teresa Hillyard and his dog "Sarge" (Kimball), his parents Wayne and Mary Lawson (St. Clair), his brother, and best friend, Wayne Lawson II and his sister Michelle Lawson (St. Clair). He also leaves behind a niece and nephew, which he loved very dearly - Emily and Mason Lawson (Marysvillle). He also had a large family of loving and caring aunts, uncles and cousins in which he was very close to. Scott was a very highly-decorated war veteran who served in Germany, Korea, Kosovo, Egypt, Afghanistan and Iraq during his 8-year career in the United States Army as an expert infantryman and a weapons squad leader. He was discharged in 2005 as a very highly- decorated Staff Sergeant. Scott was recognized for several acts of valor and had been granted several awards over his 8-year career in the military, in fact too many awards and medals to name, however his proudest moment was when he received his Bronze Star. Scott was written about in Time Magazine (November 2004 edition) as he was one of the first infantryman to enter the highly-guarded "hot zone" in Fallujah. He was interviewed on CNN about his courageous efforts upon his exit of the Army and there has been a book written and published about his courageous and brave acts - saving his soldiers lives, acting without fear and leading a highly-armed weapons squad (Book is entitled "House to House" and is currently on Amazon). The book is currently being turned into a movie as negotiations by the author and the producer have just recently agreed to terms. Prior to the military, Scott went to Yale High School, and then worked for several construction companies, after just a few short years in the construction field, he decided that he wanted to serve his country, and therefore joined the National Guard. Shortly after joining the National Guard he decided to enlist full time in the Army to which he sacrificed 8 years of his life - mostly on demilitarized zones or in battle. Scott leaves us as an employee of Cargill Salt Company in St. Clair, which he enjoyed tremendously. He loved his colleagues and was very proud to work for such a tremendous company. He took great pride in his overachieving work ethics and had hoped to make a career at Cargill like his grandfather Russell Dandron did. Visitation for Scott will be held at Friederichs & Son funeral home in St. Clair on Friday, August 2nd from noon to 3 PM and 5 PM to 9 PM. His military funeral will begin precisely at 11 AM Saturday. Memorials may be made to the American Legion Charles Fulton Post # 382, St.Clair.

The family of Mr Scott A Lawson created this Life Tributes page to make it easy to share your memories.

Send flowers to the Lawson family.