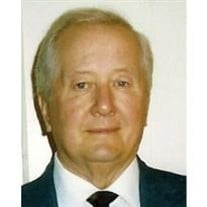 It is with heavy hearts that the family of Russell Harry Turecky announce his passing to Eternity on Thursday, December 22, 2011 at St. Joseph Mercy Hospital in Port Huron, Michigan. Russell was born April 22, 1933 in Edmonton, Alberta, Canada of Urrainian/Polish parents, Peter and Stella Turecky. He was second son of six children: one brother and four sisters. The family moved to Toronto, Ontario when he was three years old. His education was at the Charles D. Frazer Elementary School, Central Technical School, and Beaux Art School in Montreal, Quebec. He graduated from Kent State University under the G.I. Bill with a B.S. in Art Education on June 10, 1961. Attended the Masters Program at Eastern Michigan University in Ypsilanti, Michigan. Upon graduation, he student taught in the Elementary Education pilot program in Ravenna and Akron, Ohio. Russ retired in June 1986 from the East China Township School District. He was an accomplish artist, a founding member of the St. Clair Art Association where he exhibited and taught; Art Association Scholarship Program; teacher and coordinator of the Adult Education Program for St.Clair Community College in Port Huron; Blue Water Art Club, Port Huron; Teacher/Exibitor at the Mt. Clemens Art Club; tutored many art students in the Blue Water area; exhibited at many Art Fairs through the years; exhibitor at Freedom Village, Holland, Michigan; Detroit Institute of Arts Rental Gallery. Many of his paintings hang in Canada, Michigan, Tennessee, and elsewhere. Although he was a Canadian citizen, Russ enlisted in the United States Army occupation of Germany from 1954 to 1957, and in Standby Reserves until 1961. He obtained the rank of SP3 in the Third Armored Division (George Patton) and became a naturalized U.S. citizen in Germany. Russ married the love of his life, his devoted and loving wife Lorraine Anne Pelacek-Turecky of London, Ontario on August 8, 1957 and they lovingly shared 54 and 1/2 years of marriage. Russ and Lorrie had four children: Anthony Peter (deceased); Julie Ann and Roger Verscheure of Glencoe, Ontario; Russell John and Laurie of Jenison, MI; and Daniel Paul and Peggy of Gwinn,MI. He is survived by his brother Robert Paul Turecky, sisters; Elizabeth Rossetti, Jenny Shayne, Sonia and John Soules, and Stephanie Wojnarowskyj, and sisters-in-law; Carol Lee Pelacek and Helen Mary McManus and numerous nieces and nephews. He will be greatly missed by beloved grandchildren; Jaqueline , Amber, Anja, and Katrina. Also by loyal sidekick Moushka. Russ was a master Mason, Pine Grove Lodge#11; a faithful member of St. Mark's Episcopalian Church, of 47 years holding many of offices through the years; Boy Scout advisor; American Legion member; Veterans of Foreign Wars member; St. Clair Chamber of Commerce member, and a Rotarian. His hobbies were painting ( all mediums); crosswords; he was interested in foreign languages and was fluent in Ukrainian and German. Russell was predeceased by his parents Peter and Stella Turecky; father and mother- in-law Peter and Anna Pelacek; his eldest son Athony Peter; baby grandson Turecky; a granddaughter Holly Nicole; brothers in law; Donald Pelacek, Nick Wojnarowsyz, Robert Rossetti, Maurice Koziel and Robert McManus, and sisters-in-law; Virginia Turecky and Jeanette Koziel. Services will be held at 10:00 a.m. Monday, December 26 at L.C. Friederichs and Son Funeral Home, St. Clair. Interment will follow at Rosehill Cemetery, East China Twp. Visiting hour will be from 9:00 a.m. to 10:00 a.m. prior to service. In lieu of flowers, memorials may be made to the wishes of the family. www.lcfandson.com

It is with heavy hearts that the family of Russell Harry Turecky announce his passing to Eternity on Thursday, December 22, 2011 at St. Joseph Mercy Hospital in Port Huron, Michigan. Russell was born April 22, 1933 in Edmonton, Alberta, Canada... View Obituary & Service Information

The family of Russell H. Turecky created this Life Tributes page to make it easy to share your memories.

It is with heavy hearts that the family of Russell Harry Turecky...

Send flowers to the Turecky family.