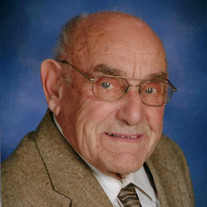 Rolland G. Eisen, age 95, of St. Clair, passed away Sunday December 26, 2021 in his home surrounded by his family. He was born on March 3, 1926 to the late Carl and Albertha Eisen. Rolland married Lois Schunk in 1951 who preceded him in death on May 23, 1997. As an eighteen-year-old, Rolland graduated from St. Clair High School in 1944 and immediately served with the Army 4th Armored, 10th Infantry Division where he received his nickname “Ike” after General Dwight D. Eisenhower. He fought in the Battle of the Bulge, helped to liberate the concentration camps and helped with the recovery at the end of WWII until 1946. He was also chosen to serve as an Honor Guard for General George Patton’s funeral service in Luxemburg as well as a guard for the building which held the Nuremburg Trials. Rolland retired from Michigan Consolidated Gas Company in 1998. He loved being with his family, traveling with his wife prior to her passing, camping, building, plumbing and electrical projects (Usually for his family). He was a lifelong member of St. Peter’s Lutheran Church in St. Clair, where he served many years on Church Committees. He is survived by his children, Carol (Craig) Raymond, Patricia (Ed) Yax, Gary (Annie) Eisen, Nancy (John) Warwick. Rolland has ten grandchildren, Stacey Yax, Chad Raymond, Ed Yax, Joe Yax (Fiancé Iman Al-Hussein), Samantha (Glenn) Schlottman, Charlie (Erin) Raymond, John (Kristin) Warwick, Becky Yax, Bethany Eisen, and Zachary (Lindsey) Eisen. He also has fifteen great- grandchildren, Lauren and Jared Kramp, Owen and Alyssa Yax, Matthew and Josie Schlottman, Sawyer and Sydney Warwick, Caleb and Cade Yax, Cullen and Cain Raymond, Olivia and soon to be born sister and Niko Yax. He is also survived by his brother, George, who is two years younger and shares the same birthday, and brother in-law, William Schunk. He will be missed by his special friend, Dorothy Schueneman and Michele Eisen. Known as Uncle Rollie, he has many nieces and nephews. In addition to his wife and parents, Rolland is preceded in death by his brother and sister in-laws, Louis (Doris) Eisen, Doris (George) Eisen, Carl (Marlene) Eisen and sister, Karen. Also, his in-laws, Wilson and Velda Cleland, Robert and Phyllis Behringer, Ken and Delores Schunk and nephew Donn Behringer. A one-day visitation and service will be held on Sunday, January 2, 2022 with visitation from 2:00 p.m. to 6:00 p.m. with a service at 6:00 p.m. followed by military honors at L.C. Friederichs and Son Funeral Home, St. Clair. In Lieu of flowers, memorial contributions may be made out to VNA/Blue Water Hospice, St. Peter’s Lutheran Church or to the charity of donor’s choice. To leave a message of comfort visit www.lcfandson.com

Rolland G. Eisen, age 95, of St. Clair, passed away Sunday December 26, 2021 in his home surrounded by his family. He was born on March 3, 1926 to the late Carl and Albertha Eisen. Rolland married Lois Schunk in 1951 who preceded him in death... View Obituary & Service Information

The family of Rolland G. Eisen created this Life Tributes page to make it easy to share your memories.

Send flowers to the Eisen family.