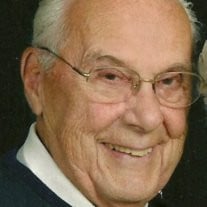 Robert S. Tassie, age 87, of St. Clair passed away Friday, November 15, 2013. Bob was born July 14, 1926 in St.Clair, to the late John William and Della M. Tassie. He married Donna Balfour on February 11, 1950 in St.Clair. Bob served his country faithfully in the United States Army. After returning to St.Clair, he worked for the St. Clair Police Department. He was a member of the St. Clair Beautification Commission and an active member of the First United Methodist Church, St.Clair. Bob was a member of the Moslem Temple, Detroit; 32nd Scottish Rite, Detroit; Blue Water Shrine Club, Port Huron; Blue Water Scottish Rite Club, Port Huron; Royal Arch Masons, Chapter 12, St.Clair and Evergreen Lodge #9, St.Clair. He retired from the Detroit Edison in 1989 after 36 years of service. He is survived by his wife; Donna; two sons; Kenneth (Wendy) and James (Carol); four grandchildren; Kimberly, Michael, Erin (Spike) and Shane as well as many nieces and nephews. He was preceded in death by his parents; brothers; Buck, Boyd, and Don Tassie; and sister; Margaret Coulston. Services will be held at 11:00 a.m. on Tuesday, November 19 at the First United Methodist Church, St.Clair. Visiting hours will be Monday from 2:00 to 9:00 p.m. at L.C. Friederichs and Son Funeral Home, St. Clair with Masonic service held at 7:00 p.m. In state on Tuesday in church from 10:30 a.m. to 11:00 a.m. prior to the service. Interment will follow at Hillside Cemetery, St.Clair. Memorials may be given to the First United Methodist Church or the Evergreen Lodge #9. www.lcfandson.com

The family of Robert S. Tassie created this Life Tributes page to make it easy to share your memories.

Send flowers to the Tassie family.