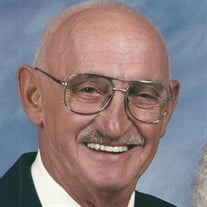 “Ya-But” now is silent. The fish can finally rest. The Good Lord has surely proven, among fishermen, He has taken the best! Robert (Bob) C. Heydens, 87, peacefully passed away Thursday, November 9th. He was born January 9, 1930 to the late Paul and Georgina (Bourgeois) Heydens, in Norway, MI (U.P.). He moved down to the Detroit area at the age of 16, where he met and married Rita (Wojtysiak) the day after her 18th birthday, on February 3, 1951. He lost, Rita, his bride of 64 years, in May of 2015. Together they began Bob’s Army life moving to Fort Sill, OK, while he proudly served his country. Their first child was born there in 1954. Upon honorable discharge, they settled in Detroit for Bob to continue his work at Chrysler Corporation, from which he retired (Marysville Parts Depot), in May of 1985. While in the Detroit area, they were blessed with three more children, before relocating to St. Clair in 1965. Bob was also preceded in death by four siblings and his son, Paul R. Heydens (2005) and daughter, Judith M. Raymond (2010). Bob is survived by his children, Sue (Bill) Karas and Nick (Tina) Heydens, son-in-law Mike Raymond and daughter-in-law Paula McDade-Lesinski. Also surviving are 11 grandchildren and 16 great-grandchildren, all of whom he loved to spoil. His family would like to thank River Bend Assisted Living, which made them feel like family from the day Bob moved there this past August. A very special thank you goes out to Bob’s “boss” Stacey and the rest of the “girls” Harmony, Nancy, Donna and Tina, and all others who helped in the past. Their love, compassion and support was invaluable to his family. Thank you’s are not complete without letting Bob’s dear buddy, Bill “Billy” Westrick (who never let him go without his chili dogs or a ride up to the lake) know how much we appreciated the time he and others gave for him. God bless you all! Visitation will be at L.C. Friederichs and Son Funeral Home, St. Clair on Sunday November 12th from 4:00 to 8:00 p.m. and Monday, November 13, 2017 at 10 a.m. with services at 11 a.m. In lieu of flowers, memorials may be made to the Bill Beaudua Memorial Marble Eye Tournament Fund, a tournament in which Bob still holds the record for the largest walleye caught (in 2005) at 10 lbs 5 oz and 31-1/2 inches long.

&#8220;Ya-But&#8221; now is silent. The fish can finally rest. The Good Lord has surely proven, among fishermen, He has taken the best! Robert (Bob) C. Heydens, 87, peacefully passed away Thursday, November 9th. He was born January... View Obituary & Service Information

The family of Robert C. Heydens created this Life Tributes page to make it easy to share your memories.

“Ya-But” now is silent.
The fish can finally rest.
The Good...

Send flowers to the Heydens family.