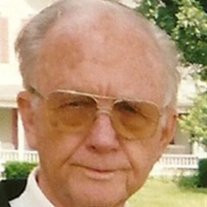 Robert Gerald Hetherington, beloved husband, father, grandfather and great-grandfather, passed away Thursday, February 14, 2013. He was 99 years old. Robert was born May 30, 1913 to John and Louise (Lulu) in Harrisville, MI, the youngest of three children. Robert met his beautiful bride, Margaret Jean Jones, when they were in grade school. A few years later, they started dating and after 6 years of courtship, married in August of 1940 in Forest, Ontario. In 1941, Robert and Margaret moved over to Detroit, MI. Shortly thereafter, Robert began a long and successful career at the Detroit Edison. With hard work and self-education, he worked his way up the ranks to Supervising Operator, retiring from the St. Clair plant in 1975. Robert is survived by his wife, Margaret; daughter, Barbara (William) Cunningham; son Gerald (Cheryl) Hetherington; grandchildren, Erick (Andrea) Hetherington, Michael Hetherington, Shelley Bollivar, Terry Hetherington, Jeff Bollivar, Scott Hetherington, Sean (Sarah) Hetherington, Nicole Cunningham, Bill (Melissa) Cunningham, Aaron Cunningham, Jaime Cunningham; and 12 great-grandchildren. Robert was preceded in death by his parents, sisters, Ivy and Victoria and sons, John and Carl. Visitation and funeral services will be held on Sunday, February 17, 2013 at Friederichs Funeral Home in St. Clair, MI. The family will greet friends from 1 pm to 4 pm, and the service will take place at 4 pm. There will be a reception immediately following the service, at The Voyageur. Those wishing to sign the guest book may do so at www.lcfandson.com .Burial will follow later in the week at Beechwood Cemetery in Forest, Ontario.

Robert Gerald Hetherington, beloved husband, father, grandfather and great-grandfather, passed away Thursday, February 14, 2013. He was 99 years old. Robert was born May 30, 1913 to John and Louise (Lulu) in Harrisville, MI, the youngest of... View Obituary & Service Information

The family of Mr Robert G Hetherington created this Life Tributes page to make it easy to share your memories.

Send flowers to the Hetherington family.