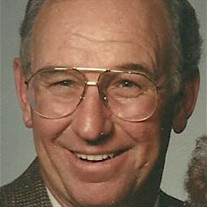 Richard “Dick” Schweihofer passed away peacefully surrounded by his loving family on October 28, 2016. He was born in the family home on February 25, 1939 to Henry (Hank) and Thelma Schweihofer. His twin sister, Karen Ann, followed him into this world. Dick fell in love with Mary Eugenia (Jean) Joachim and they were married on August 10, 1963. They made a wonderful life together for 53 years, raising their 3 children, and welcoming nine grandchildren into their family. Dick started working with his father in landscaping, eventually becoming owner and operator of Hank Schweihofer & Sons. After his retirement, he enjoyed spending many of his winter months in Indio, California. Dick will be best remembered for his kindness, his friendliness and his sense of humor. Laughter surrounded him wherever he went. Having spent a lifetime in St. Clair, he had countless friends and cared deeply about others. He was especially devoted to his family. Accounts of his “Dickisms” will continue to bring joy to so many whose lives he touched. Dick was a member of St. Mary’s Catholic Church and the St. Vincent de Paul Society. He served on various committees for the City of St. Clair over the years. Dick is survived by his wife, Jean; his children, Amy Wingate (Kevin), Richard (Rick) Schweihofer (Elizabeth), and Angela Van Hecke (Jason). His grandchildren, Emily, Graham, Holly, Henry, Hazel, Emma, John Douglas, Nicole, and Trevor, were the lights of his life. Dick is also survived by his sisters, Patsy (Henry) Greenwood, and Gloria Jacobs , a brother Glenn (Donna), brother-in-law, Alger Mahn., and many nieces and nephews. He was preceded in death by his parents and his twin sister, Karen Ann Mahn. A Mass of Resurrection will be held at 11:00a.m. on Wednesday, November 2, at St. Mary’s Catholic Church, St. Clair. Visitation will be held on Tuesday, November 1, at L.C. Friederichs & Sons Funeral Home, St. Clair, from 1:00p.m. until 8:00p.m, and on Wednesday at 10:00 a.m. at St. Mary’s Church. Memorials can be made to St. Vincent de Paul Society or the Capuchins.

Richard &#8220;Dick&#8221; Schweihofer passed away peacefully surrounded by his loving family on October 28, 2016. He was born in the family home on February 25, 1939 to Henry (Hank) and Thelma Schweihofer. His twin sister, Karen Ann, followed... View Obituary & Service Information

The family of Richard Schweihofer created this Life Tributes page to make it easy to share your memories.

Send flowers to the Schweihofer family.