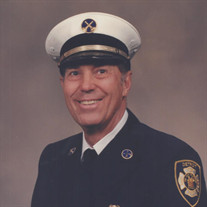 Raymond A. Schiepke, age 91, passed away April 7, 2020. He was born January 1, 1929 in Detroit to Stephen and Lydia Schiepke. Raymond married Martha Jo Freeman on June 13, 1958. She preceded him in death in 2013. Raymond honorably served in World War II with the U.S. Marine Corps with rank of Staff Sergeant. Raymond also served as a Detroit Firefighter for 37 years, retiring as Battalion Chief. He was a resident of Detroit until his retirement in 1989 and then moved to St. Clair. His memberships included the American Legion, Detroit Firefighters Assoc., Detroit Firefighters Fund and Immanuel Lutheran Church, St. Clair. Raymond was known for his incredible fighting spirit. He was a proud Marine who displayed a high regard for honor, courage and commitment that was reflected in everything he did throughout his life. He was devoted to his faith, community and family. He was always present for every sporting event, birthday celebration and holiday gathering with his loved ones. He loved golfing, discussing sports and having a beer with anyone. His loud, jovial laugh will be remembered forever by all who knew him. He is survived by his children, Jeff Schiepke, Julieann Schiepke and Michael (Christine) Schiepke; grandchildren Stephanie Schiepke, Meghan (Joshua) Sanborn, Sean Greene, Daniel (Allisen) Greene and Karl Schiepke; great grandchildren Taylin, Tessa, Mac, and Rowan and sister Carolyn Schiepke. Memorials may be made to the Alzheimer’s Association. Arrangements by L.C. Friederichs & Son Funeral Home, St. Clair. To leave a message of comfort visit www.lcfandson.com

Raymond A. Schiepke, age 91, passed away April 7, 2020. He was born January 1, 1929 in Detroit to Stephen and Lydia Schiepke. Raymond married Martha Jo Freeman on June 13, 1958. She preceded him in death in 2013. Raymond honorably served in... View Obituary & Service Information

The family of Raymond A. Schiepke created this Life Tributes page to make it easy to share your memories.

Send flowers to the Schiepke family.