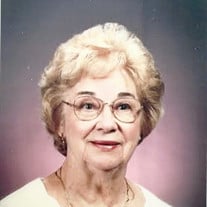 Norma Rose Chatley was born Feb. 5, 1921, in Buffalo, NY. The daughter of Philip and Rose (Serach) Hogg. She married John Carr Chatley on Sept. 1, 1941. Through her life, she lived in several memorable cities, moving as part of John’s job with Diamond Crystal Salt, but John and Norma made their home in St. Clair, Michigan. There they raised their two children, Rosemary and John, enjoyed life along the river and spent time with many good friends. John preceded Norma in death on August 23, 1986. Norma is survived by a daughter Rosemary (Stephen) Zimmer, of St. Clair, and a son, John C (Pamela) Chatley, of Lake Orion, MI; the grandchildren she cherished, Kathryn (Pete Dull) Zimmer, Peter Zimmer, Scott Chatley, Cue (Wendy) Chatley, and Carl (Lola) Helka, as well as her great-grandchildren, Alexis, Zachary and Sienna Rose Helka. Norma was pre-deceased by brothers Gerald and Gilbert Hogg, and a sister, Phillis Heinen. Throughout her life, Norma had tremendous faith in prayer, the power of education and a person’s ability to bring beauty to their surroundings. She was active in St. Mary’s school programs and the church for a number of years. Norma was also a founding member of St. Clair Study Club and the St. Clair Garden Club. Norma Rose Chatley went to her eternal peace on April 27, 2014. Cremation has taken place. A Memorial Mass will be held on May 17, 2014, 11 am, at St. Mary’s Catholic Church, St. Clair. Memorials may be made to St. Mary School Scholarship Fund. She will always be remembered as a good friend, neighbor and wonderful mother and grandmother.

Norma Rose Chatley was born Feb. 5, 1921, in Buffalo, NY. The daughter of Philip and Rose (Serach) Hogg. She married John Carr Chatley on Sept. 1, 1941. Through her life, she lived in several memorable cities, moving as part of John&#8217;s... View Obituary & Service Information

The family of Mrs Norma Rose Chatley created this Life Tributes page to make it easy to share your memories.

Send flowers to the Chatley family.