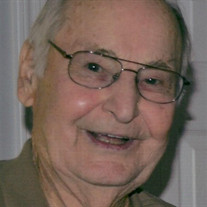 Michael Stanley Burylo- April 27, 1929- May 10, 2015 Mike Burylo was born in Detroit, Michigan on April 27, 1929 to Michael and Magadalena Burylo. Raised in Detroit during the Depression, he learned the value of hard work early. Attending high school during World War II, with his three half-brothers off to war and his father injured in an industrial accident and unable to work, Mike worked forty hours a week for the local Coca-Cola bottler to help support his family, while simultaneously attending class and playing football and baseball. The highlight of his school years was his senior baseball team winning the city championship playing at the old Briggs Stadium ( old Tiger Stadium. After high school, Mike went to work for an electrical contractor and then the Detroit Edison, where he started digging ditches with the construction division and ending up forty-two years later as Systems Maintenance Supervisor for most of Michigan's Thumb Region. His career at Edison was interrupted duing the Korean War, when he enlisted with the U.S. Navy, serving four years aboard the destroyer USS Preston (DD-795). After spending time shelling North Korean defenses adn rescuing downed pilots, the Navy generously provided him with a free around -the-world cruise, with port call throughout the Mediterranean and Europe. Always a devout Catholic, his highlight during this time was port call in Rome, where he visited the Vatican and had an audience with the Pope. At the end of his service, he returned to Detroit and his job Edison. He married Frances Toth on May 5, 1956 at Holy Cross Catholic Church in Delray. They had two children, Michael and Alice, and moved to St. Clair in 1964 when he was transferred to work out of Detroit Edison's Marysville Service Center. One of his proudest accomplishments after moving to St.Clair was purchasing 20 acres of land and building his and Frances' dream house with his own hands. Tragically, Frances died December 24, 1971. After Frances' death, as a single parent he provided his children with the Christian values, education and work ethic that served him so well. During this time, with his love of travel whetted from his Navy days, he took his family on an epic journey across Canada to visit family in Saskatchewan and then on to the Pacific coast and back to the U.S. to see sights, including the 1974 World's Fair in Spokane, Washington as well as Yellowstone National Park. The trip left the family with a lifetime of memories, even when the memories diverged, with Mike remembering every other night hotel stays and his children only remembering driving the Ford pickup with the slide-in camper on many mile detours down gravel roads to 50 cent a night national park campgrounds that lacked electricity, running water, and flush toilets. After his children grew up, he again looked for companionship and found it with Vera Garlick, whom he married on December 30, 1978 in Marine City, Michigan. They spent a number of happy years together until she unforturnately died on October 14, 1990. After Vera's death and his retirement from the Edison, he met Ann Keegan and married her on April 27, 1992 in Las Vegas, Nevada. Always a practical man, he married Ann on his birthday so he would never forget their anniversary. They moved to Fort Gratiot, MI and also purchased a winter home in Plant City, Florida. Mike took advantage of the endless summers and engaged whole-heartedly in his love of golf, playing in leagues in Michigan and Florida. He and his many golfing buddies often won top honors for their flights on the leagues he played. Even after selling the home in Florida and moving back to Michigan full time, he continued to play at least 18 holes a week up until the golf season ended this past fall. Mike's faith was paramount in his life and he was a member of St.Mary's Catholic Church in St.Clair for over fifty years. He was a long time usher, counted collections, sang in the adult choir, belonged to the Knights of Columbus, and for several years when he was younger handled the electrical wiring for the annual parish festival. Mike was pre-deceased by his parents, his sister Helen Daneluk, his half-brothers John, Steve, and Al Furtak, his wives Frances and Vera. He is survived by his wife Ann, his children Michael (Linda) and Alice, stepchildren Sue (Larry) Armstrong and Rob (Gisele) Keegan, grandchildren Janet (Stacey) Brown and Sarah Armstrong, great-grandchildren Nathan and Micah Brown, and many nieces and nephews. Funeral mass will be held at 11:00 a.m. Friday at St.Mary's Catholic Church, St.Clair. Visiting hours will be from 2:00 to 4:00 p.m. and 6:00 to 8:00 p.m. Thursday at L.C. Friederichs and Son Funeral Home, St.Clair and from 10:00 to 11:00 a.m. Friday at church prior to mass. A rosary will be said at 7:00 p.m. Thursday evening. In lieu of flowers, memorials may be made to St. Mary's Catholic Church, St.Clair. www.lcfandson.com

Michael Stanley Burylo- April 27, 1929- May 10, 2015 Mike Burylo was born in Detroit, Michigan on April 27, 1929 to Michael and Magadalena Burylo. Raised in Detroit during the Depression, he learned the value of hard work early. Attending... View Obituary & Service Information

The family of Michael S. Burylo created this Life Tributes page to make it easy to share your memories.

Send flowers to the Burylo family.