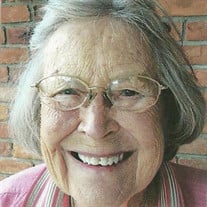 Marjorie Ann Brieden passed away peacefully, July 23, 2016, at the age of 90. She was born January 21, 1926, in Columbus, Ohio, the second of three children, to parents Edward Prior Jr. and Imo Gladys (Dreisbach) Prior. She was a loving wife, mother, grandmother, great grandmother and friend to many in her lifetime. The night she met Walter B. Brieden, at a college dance, he declared that he was going to marry her. He always said she was the most beautiful woman on, what is now known as, Central Michigan University’s, campus. They were later united in marriage December 27, 1946 at St. John’s Episcopal Church in Mt. Pleasant and enjoyed nearly 56 years together until he passed away August 7, 2002. Marjorie graduated from Central Michigan University and later earned her Master’s Degree from Michigan State University. She taught elementary school in Walled Lake, stayed home with her family for many years and later returned to teaching in St. Clair, MI. She was a golfer for over 60 years, playing her last game at the age of 87, played bridge several times a week and kept fit with yoga until several months ago. She also volunteered at St. Paul’s Episcopal Church Thrift Shop for over 40 years. Marjorie was predeceased by her parents, Edward and Imo Prior; husband, Walter B. Brieden; and brothers Edward Prior Jr. III and Herbert Prior. She is survived by four children: Andrea K. Brieden, Dr. Christopher (Karen) Brieden, Dr. Mark (Dixie) Brieden and Dr. Elizabeth Brieden; grandchildren: Drs. Ryan (Jolanta) Wilson, Reilly (Louis) Cribbins, Aaron Brieden, Anne Brieden, Camden (Selina) Brieden, Kylee Brieden, Samuel Brieden, Maxwell Brieden, Blair Mannella, Hans Mannella and Mia Mannella; great grandchildren: Amelia, London and Lincoln Cribbins, Remington Wilson and Aaron Brieden and many nieces and nephews. Her family will receive friends, Wednesday, July 27, 2016 from 4:00 – 8:00 PM In the L.C.Friederichs & Son Funeral Home, with a memorial service on Thursday, July 28, 2016 at 11:00 AM at St. Paul’s Episcopal Church in St. Clair, MI. Memorials may be made to St. Paul’s Episcopal Church, St. Clair or Friends of the Library – St. Clair Library.

Marjorie Ann Brieden passed away peacefully, July 23, 2016, at the age of 90. She was born January 21, 1926, in Columbus, Ohio, the second of three children, to parents Edward Prior Jr. and Imo Gladys (Dreisbach) Prior. She was a loving wife,... View Obituary & Service Information

The family of Marjorie Ann Brieden created this Life Tributes page to make it easy to share your memories.

Send flowers to the Brieden family.