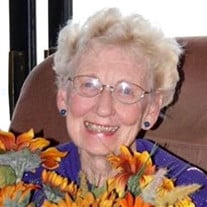 Marie Pearl Siewert Hingelberg, 96, a long time resident of St. Clair, Michigan, passed away Sunday, August 2, 2015 in St. Clair. She was born in Detroit, Michigan on February 9, 1919, the fourth of five girls (Mildred, Ruth, Grace and Betty) to Ernest and Martha Siewert. She graduated from Highland Park High School at the age of 16, and from Central University at 20, receiving her teachers certificate at the same time. She taught for two years in Jackson, Michigan before marrying Edwin John Hingelberg on June 21, 1941 at Central Methodist Church in Detroit. Two children were born to Marie and Ed: Amory Marie and Edwin Clair. Marie returned to teaching in 1949 at Eddy Elementary School in St. Clair where she taught kindergarten, first and second grades before retiring in June 1984. Marie joined the St. Clair United Methodist Church in December 1952. She and her husband were both active members. Marie participated in every branch of the church at the local, district and conference levels. She served as president of the local United Methodist Women and the Port Huron District United Methodist Women. She spent many years as a member of the District Board of Ordained Ministry, and eight years each on the Bishops Episcopacy Committee and the Conference Board of Ordained Ministry She received training to become a Certified Lay Speaker and taught classes so that others could become lay speakers as well. In 1999, the St. Clair County Church Women United named her 1999’s “Valiant Woman.” She was a member of the River District Hospital Auxiliary, serving as a Pastoral Care Giver. In earlier years, she was co-leader of Girl Scout Troop #6 and President of the former St. Clair Girl Scout Council. She was an active member of the Alpha Delta Kappa Sorority, St. Clair Study Club, Birthday Bunch, the St. Clair Art Association, and the former St. Clair Music Club. She enjoyed the Town Hall and Marine City Concert Series. Her home, The River House, was the gathering place for family and friends. Countless people have enjoyed her hospitality. On July 4, 2015, she hosted the largest gathering ever when 125 people attended her granddaughter Roz’s wedding. Marie’s husband Ed died in May 1981. She is survived by her son Edwin Hingelberg (Julie) of Plymouth, MI and daughter Amory Peck (Linda Lambert) of Bellingham, WA; grandchildren Amy Nachtegall (Brian); Roz Giroux (Jeff); John Hingelberg (Gabriele); and Joe Hingelberg; great-grandchildren Gracelyn, Adalyn, David, Ella, and Isaac. Visitation will be held 5-8 p.m. Wednesday at L.C. Friederichs & Son Funeral Home. In state Thursday at First United Methodist Church, St. Clair, from 10 AM till service at 11 AM, with a reception after the service. Memorial donations may be made to the St. Clair United Methodist Church or the River District Hospital Auxiliary.

The family of Mrs Marie P Hingelberg created this Life Tributes page to make it easy to share your memories.

Send flowers to the Hingelberg family.