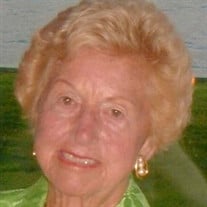 Margaret E. Kuhn passed on March 25, 2015, at her St. Clair home. She was born April 24, 1918, to the late Ida and Lawrence Friederichs, in St. Clair. She married Bernard E. Kuhn on January 11, 1941. Mrs. Kuhn, a life-long member of St. Mary Catholic Church, of St. Clair, attended Marygrove College and volunteered for the American Red Cross. She served as President of the Women’s Golf Association of the St. Clair Golf Club, and she was a member of the St. Clair Garden Club and the St. Clair Art Association. For the past 45 years, she was proprietor of Hers Fashions, in the St. Clair Riverview Plaza and, for many years, served as an officer of the Plaza Co-Owners Association’s Board of Directors. Mrs. Kuhn is survived by her husband of 74 years, Bernard, and their three children: Bernard “Butch” (Suzanne), Barbara (James) Cleland, and Mary Joellyn (Norbert) Strzelecki; seven grandchildren: Margaret Kelly, Jennifer, James, Christine, Bernard, Angela, and Katherine; 13 great-grandchildren; her sister, Joan (Harry) Winston; and many nieces and nephews. She was predeceased by her brother George “Bud” Friederichs, and many sisters-in-law and brothers-in law. The family gratefully acknowledges the caregivers and home assistants for their long-time devotion. Visitation 2-4 and 6-8 PM Friday on the L.C. Friederichs & Son Funeral Home. In state Saturday at St. Mary's Catholic Church from 10 AM till mass at 11 AM. Burial in St. Mary's Cemetery In honor of Mrs. Kuhn, memorial contributions maybe made to the St. Clair Riverview Plaza Park, care of the Community Foundation of St. Clair County or to St. John River District Hospital.

The family of Mrs Margaret E. Kuhn created this Life Tributes page to make it easy to share your memories.

Send flowers to the Kuhn family.