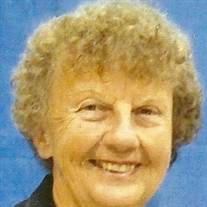 On Wednesday, December 3, 2014, Margaret Ann “Peggy” Cedar, with her children at her side, was reunited with her husband of 57 years, Bill, married on September 20th, 1952. Peggy was born April 5th, 1932, to the late Edward and Margaret Klieman in Marine City, MI. Peggy was a devoted wife and mother of six children, Cathy Artman (Bob), Bill Cedar, Jr. (Karen) Mike Cedar (Tracy), Carol Zimmer (Mike), JoAnn Trepiak (Ken) & little Peggy, all the while, playing a big part in the day to day operations of Burkarts Bar for over 20 years, with her husband Bill, her brother, Kenny & his wife Chris, perfecting “The Burkie Burger”. Peggy loved sports and being outside, she especially loved ironing and hanging a pretty wash on the line outside. She enjoyed swimming in her and Bill’s pool in the sideyard with her grandchildren, Rod, Kurt, Joe, Tim, Erin, Mandy, Billy, Emily, Katie, Meg, Sean, Michael, Brandi, Alicia, Thomas, Tony & Becca. However, she also enjoyed a cold Stroh’s laying in the sun on the dock at the family boathouse. Her whole life was devoted to being a mother and a wife. After five long years she is with Bill, but will be remembered and treasured by her children. She is also survived by her sister, Kate Muehleisen, Sister in laws, Chris Klieman, Marie Klieman and several nieces and nephews. She was preceded in death by her parents, her brothers, Kenny and Ed (Tuffy), her niece, Cookie. Brother in law, Arnold. And the family’s little angel, her granddaughter, Allison. Visitation in the L.C. Friederichs & Son Funeral Home, Friday from 2-9 PM and Saturday from 10 AM till service at 12 Noon in the Funeral Home. Burial in Hillside Cemetery. Memorials to Marine City Old Newsboys, Diabetes Association or donor’s choice.

The family of Margaret "Peggy" Cedar created this Life Tributes page to make it easy to share your memories.

Send flowers to the Cedar family.