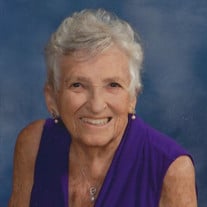 Lorraine was born April 4, 1926, in Croswell, MI to Ted and Coraline Laidlaw. Her mother married Thoburn Weaver, who adopted her when she was 12 years old, and she became Lorraine Weaver. Lorraine married Victor V. Levitt September 13, 1947. They were married for 52 years when Vic died of cancer. Lorraine is preceded in death by her husband Vic, her youngest son, Kent, brother Douglas Weaver and grandchild Faith Florence Fidino. Lorraine is survived by five of her children Gary (Nancy) Levitt of St. Clair, MI; Gayle (Ed) Gensler of Independence, MO; Wayne (Anne) Levitt of Berne, NY, Wynn Levitt of Homer, AK, and Kimba Levitt (Greg Corner) of Whitmore Lake, MI; 11 Grandchildren; and 12 great grandchildren and one on the way. She is also survived by her beloved sister Penny (Robert) Wait of Punta Gorda, FL, sister in law, Sharon Weaver, and brother and sister in law, Sharron and Fred Henderson, as well as numerous nieces, nephews and cousins. Lorraine and Vic lived in Croswell for the first two years of their marriage and then moved to St. Clair where Lorraine had a beauty salon in the basement of their home and helped run the office of the Vic’s Collision shop. Lorraine and Vic raised six children, were very active in their church, and ran a business for 30 years. In 1985, they became “snowbirds” and spent winters in Florida. After Vic’s passing, Lorraine married Leo Malecha and they had 12 happy years together. Lorraine was a strong woman of faith. She mothered several children other than her own. She was a “big sister” to some, and took in a child for a period of time when his parents needed help. She had the perseverance and wisdom to see things through. She enjoyed her church family in Michigan and in Florida. Lorraine raised her kids to enjoy the outdoors through camping and boating. She loved a good game of cards and her Friday night “girl’s night”. Above all she loved gathering her family together. Lorraine was a skilled knitter. She made sweaters for lots of people in the family, as well as, many sweaters she donated to a favorite charity that she made from all of her leftover yarn. Lorraine donated to numerous charities. Two of her favorites were International Outreach, and Big Brothers Big Sisters of America. Memorials in Lorraine’s honor could be made to these charities. The Celebration of Life for Lorraine will be held at L. C. Friederichs and Son Funeral Home in St. Clair, MI on Saturday, February 16, 2019 at 12:00 p.m. Visitation is from 10:00 a.m. to 12:00 p.m. prior to the funeral service. To leave the family a message of comfort please visit: www.lcfandson.com

Lorraine was born April 4, 1926, in Croswell, MI to Ted and Coraline Laidlaw. Her mother married Thoburn Weaver, who adopted her when she was 12 years old, and she became Lorraine Weaver. Lorraine married Victor V. Levitt September 13, 1947.... View Obituary & Service Information

The family of Lorraine L. Levitt created this Life Tributes page to make it easy to share your memories.

Send flowers to the Levitt family.