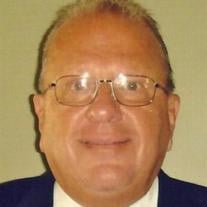 St. Clair Lee A. Strickler, passed away Monday, December 3, 2012 at his home in St.Clair. Lee was born November 12, 1950 to the late James F. and Ella Mae Strickler. He attended Michigan State University. He then attended Indiana University where he received his law degree in 1979. Lee began practicing law in St. Clair County and was a partner in the firm, McIntosh, McColl, Carson and Strickler. Lee married Susan Kotsko in 1985. Lee was very proud of his daughter Ann. Lee was active on the Cardinal Mooney Catholic High School Advisory Board until his recent illness. Lee was a member of St. Mary’s Church in St. Clair. He was instrumental in establishing the Friends of St. Mary's Fund through the St. Clair County Community Foundation. Lee is survived by his wife Susan and daughter, Ann; brothers, Jim (Michelle), Tom, Don (Jean Ann) and Greg (Jodi); mother-in-law Joyce Kotsko, sister-in-law Jane (John) Scott, brother-in-laws Tom (Gail) and Steve (Kitt) Kotsko. He is also survived by nieces and nephews. Lee and his family appreciated the out pouring of thoughts and prayers throughout his illness. Many expressed admiration for Lee’s work ethic, character and wit. The family especially wants to thank Lee’s long time friend Jim Rourke who helped in so many ways. Visitation is Wednesday, December 5, from 5-9 PM in the L.C. Friederichs & Son Funeral Home. Lee will lie in state Thursday at St. Mary's Catholic Church, St. Clair from 10:30 AM until mass at 11 AM. Pallbearers will be Ed Burkart, Rob Carson, Jim Downey, Tony Houle, John McNamee and Jim Rourke. In lieu of flowers donations may be made in Lee’s name to the St. Clair County Community Foundation Friends of St. Mary’s Fund, the Cardinal Mooney Scholarship Fund, or the charity of the donor's choice. Send condolences on line at www.lcfandson.com

The family of Mr Lee A Strickler created this Life Tributes page to make it easy to share your memories.

Send flowers to the Strickler family.