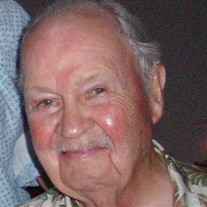 Our beloved John W. Kensler passed away peacefully with Grace at the age of 89 on December 23, 2016 at 1:22 PM E.S.T. to meet his brother’s Thomas and Gordon. His wife Janice and children were present offering him love on his journey and sharing special memories. John is survived by his beautiful wife Janice and children Carylee, David (Brenda), Stephen (Anna), and Kathleen; Grandchildren David (Tiffani), Jennifer (David), Paul, and Rachel; Great Grand- children Emma and Sophia as well as many nieces, nephews and his brother Gordon’s wife (Barbara), whom he loved very much. John was born to his mother Clara and father Thomas in Haines City, Florida later moving to Michigan, where he met and married the “Love of his life” Janice. They were together for fifty-eight years until his passing. He was a United States Army Veteran and graduated from Michigan State University. He was a lifelong avid sports fan, closely following Detroit Teams and Michigan State University; often sharing the games on the phone with his son Stephen in real time. Bowling and Golf were his active sports into his eighties, enjoying them always. He bowled with the same bunch of guys for over thirty years. These Men and their wives (the gang) traveled together or had a gathering every summer, every year since they started playing together. His son David saying “maybe the key to a long life is bowling” since they traveled through life together into their 80’s. He retired from Uarco Business Forms after thirty-eight years, retiring at sixty-two, which became the start of a new love affair with his wife Janice. They traveled to many special places over his retirement years, made many new beloved friends, danced in the kitchen, and shared their lives in every way. John was the best friend, husband and father anyone could ever have. As he lived in Grace he passed in Grace too. He will be terribly missed, yet still present in everyone’s lives that he ever touched; living on in all of us. Memorials may be made to: SNAP Humane Society of St Clair, 6176 Fred Moore Highway, China, MI 48054

Our beloved John W. Kensler passed away peacefully with Grace at the age of 89 on December 23, 2016 at 1:22 PM E.S.T. to meet his brother&#8217;s Thomas and Gordon. His wife Janice and children were present offering him love on his journey and... View Obituary & Service Information

The family of John William Kensler created this Life Tributes page to make it easy to share your memories.

Our beloved John W. Kensler passed away peacefully with Grace...

Send flowers to the Kensler family.