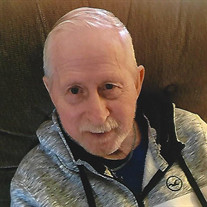 John P. Howard, age 78, of East China, passed away September 16,2018. He was born to the late James and Louise Howard on May 28, 1940 in Paducah, Kentucky. He married Brenda Qualls on February 7, 1960. She preceded him in death in 2014. John faithfully served his country with the U.S. Navy. He owned and operated Nitro Graphics in Detroit for many years. He enjoyed fishing, shooting pool, karaoke, and most of all spending time with his grand kids and giving them treats. He is survived by his children; Joey Howard, Jason Howard, and Melissa (Shaun) Sabich. He is also survived by his grandchildren; Brian, Lance, Crystal, Brent, Zachary, Autumn, Makayla, Savanna, Logan, and Jaxon and 3 great-grandchildren. The family will have a memorial gathering on Saturday, September 22 from 2:00 to 5:00 p.m. at L.C. Friederichs and Son Funeral Home, St. Clair. To leave the family a message of comfort please visit: www.lcfandson.com

The family of John P. Howard created this Life Tributes page to make it easy to share your memories.

Send flowers to the Howard family.