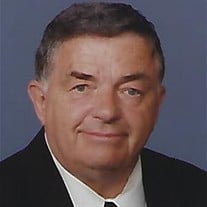 John Bernard Breslin, "JB," age 87, passed away on July 19th, 2018. He was born on September 2, 1930, in Altoona, Pennsylvania, to Neal and Marcella (McGraw) Breslin. He is survived by his wife, Kathie of 62 years, his children Neal (Carol,) Maureen Grottke, Stephanie Hartney, Marcella (Marcy) Smith, and his grandchildren Alex, Keegan and Haley. John is preceded in death by his parents, his brother Paul, and his sister, Mary Julia. John began his work life with NorthWest Airlines, going into Food Service at Willow Run Airport. He opened a new restaurant facility at Detroit-Metro Airport in Romulus, Michigan. From there, he went on to be a Food Service Administrator at various hotels and hospitals, in Illinois, Pennsylvania, and the Detroit area. John took great pride in saying he was the Food Service Director at the newly opened Machus Red Fox in Birmingham, Michigan. He retired as Director of Food Service from Oakwood Hospital in Dearborn, Michigan. After retirement, John traveled the world! He was an inspector and judge for the "Hennesey Award" which is awarded to the Air Force installations with the best food service programs. This afforded him the luxury of traveling all over Asia, Europe and Alaska as a General, on bases as well as aircraft carriers. John's Irish mother was always telling him to 'put down his roots' and settle somewhere. He finally found a home in East China, Michigan, along the St. Clair River. He was able to spend the remainder of his life on the water, enjoying the boats and freighters traveling through his back yard and on to the Great Lakes. The family extends their deepest thanks to Reverence Home Health Care and Regency on the Lake, in Fort Gratiot, for all of the love and care he received during his prolonged illness. A funeral mass will be held at 11:00 a.m. on Wednesday, July 25 at Our Lady on the River Parish Holy Cross Catholic Church, Marine City. Visiting hours will be Tuesday from 2:00 to 8:00 p.m. at L.C. Friederichs and Son Funeral Home, St. Clair and one hour at church prior to mass. There will be a prayer service at 7:00 p.m. Tuesday evening. In lieu of flowers, it is requested that donations be made to the Capuchin Blessed Father Solanus Center, Mt. Elliot, Detroit, Michigan. To leave the family a message of comfort please visit: www.lcfandson.com

John Bernard Breslin, "JB," age 87, passed away on July 19th, 2018. He was born on September 2, 1930, in Altoona, Pennsylvania, to Neal and Marcella (McGraw) Breslin. He is survived by his wife, Kathie of 62 years, his children Neal (Carol,)... View Obituary & Service Information

The family of John B. Breslin created this Life Tributes page to make it easy to share your memories.

Send flowers to the Breslin family.