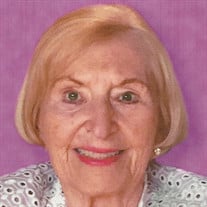 Joan (Friederichs) Winston died peacefully on October 23, 2016, after a long illness. Joan was born in Saint Clair, Michigan, on December 27, 1928 to Ida and Lawrence Friederichs. She graduated from Saint Clair High School in 1946. She was a 1951 graduate from Michigan State University majoring in Elementary Education. Joan and her beloved husband, Harry L. Winston Jr., were married in 1953 and had two children, Barbara Lydia and Harry Lewis III (Chip). Joan was a devoted wife, loved her children, grandson, relatives and friends. She accomplished many volunteer activities while living in Michigan. Having moved to Fort Lauderdale, Florida in 1974 with her family she opened Jo-an’s Papers in Lauderdale-By-The-Sea, Florida in 1980. She owned and operated this well-known gift and stationary business with her daughter until 2014. Joan was a life member of various charities in Broward County, Florida. Joan is survived by her husband, Harry; daughter Barbara Hansen (Harold); son Chip (Paula); and grandson Harry L. Winston IV. She also has surviving two sisters-in-law Sally Winston Robinson and Ernestine Winston Ruben, and two brothers-in law, Bernard E. Kuhn and Herbert Ruben, many nieces, nephews, great nieces and great nephews. In addition to her parents she was also preceded in death by her brother Bud Friederichs and her sister Margaret Kuhn. In state at St. Mary’s Catholic Church, St. Clair, Friday from 10 AM till mass at 11 AM. Interment will be in St. Mary’s Cemetery. The family asks in lieu of flowers that donations be made to Humane Society of Broward County, 2070 Griffin Road, Fort Lauderdale, FL 33312 or The Leukemia and Lymphoma Society of Florida, 200 South Park Road, Suite 140, Hollywood, Florida 33021. Arrangements by L.C. Friederichs & Son Funeral Home. Send online condolences to www.lcfandson.com

Joan (Friederichs) Winston died peacefully on October 23, 2016, after a long illness. Joan was born in Saint Clair, Michigan, on December 27, 1928 to Ida and Lawrence Friederichs. She graduated from Saint Clair High School in 1946. She was... View Obituary & Service Information

The family of Joan Winston created this Life Tributes page to make it easy to share your memories.

Send flowers to the Winston family.