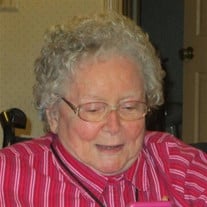 •• In her own words: Joan Elizabeth Kish Van Deusen died in the hospital February 27, 2018. She was born in Cleveland, Ohio, on August 22, 1933 to John G. and Annabelle (Brooks) Kish, and spiritually reborn February 11, 1975. A 1955 graduate of Hillsdale College, Joan completed a master’s degree in guidance and counseling from the University of Michigan School of Education. On February 4, 1956, Joan married Gerald “Jerry” Van Deusen in Rocky River, Ohio. Most of her married life was lived in St. Clair, Michigan, with her husband and three sons. A long-time member of the St. Clair First United Methodist Church, Joan joined her husband – at retirement – into ministry to the Riley Center, Berville, and West Berlin United Methodist Churches. In 1993, they became part of a core group that birthed the Crossroads Community Church in St. Clair, where they served in pastoral care ministry for many years. Joan taught adult education classes and substituted in East China Schools. She taught home economics at the Adult Learning Center in Port Huron. In recent years she has enjoyed her home hobby/business “Heaven Scent Herbs.” She especially enjoyed sharing her enthusiasm for herbs and flowers through Folk Art Days in elementary schools with volunteers from the Port Huron Museum of Arts and History. Her love for gardening and for people extended into Ontario’s Bruce Penninsula where the family spent summer vacations. As a member of the Volunteers of Flowerpot Island Lightstation near Tobermory, Joan and Jerry enjoyed time spent at the lightstation. Survivors include her sister, Carol Wolff of Worthington, Ohio, sons Jeffrey (Jamie) and John (partner Susan Van Oort), grandchildren Christopher (Ania), Adam, Kathryn (John) LeMerise, Caroljean (Rich) Conrad, and James K., and great-granddaughter Zosia Jadwiga VanDeusen. A second great-grandchild – Emma Jean Conrad - joined the family February 28, the day after Joan died. Also surviving are several sisters-in-law, brothers-in-law and numerous nieces and nephews. Joan was preceded in death by her husband, Gerald, on February 22, 2018, by their son, James Robert, on January 16, 1989, and by her parents. Cremation has taken place. A celebration of life will be held at 11:00 a.m. on Saturday, June 16 at the First Untied Methodist Church, St. Clair. Visiting will be from 9:30 a.m. until time of service. Arrangements by L.C. Friederichs and Son Funeral, St. Clair. To leave the family a message of comfort please visit: www.lcfandson.com

The family of Joan E. VanDeusen created this Life Tributes page to make it easy to share your memories.

•• In her own words: Joan Elizabeth Kish Van Deusen died in the...

Send flowers to the VanDeusen family.