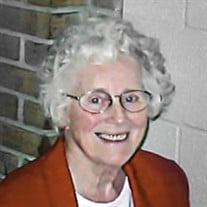 Joan L. Starkey, age 101, passed away March 4, 2021 in the loving presence of her daughter Christina and the Lord. Born in Buffalo, New York to William and Phyllis Paine, the family, along with her brother Bill, moved to the metro Detroit area. She lived most of her life in Michigan moving later to New Mexico with her daughter to enjoy the warmer weather. She found a love of the church in her teens and took great pride in helping others. From bake sales, to choir, Sunday school, to holding church positions and Meals on Wheels, Joan's faith and service to others was ever present in her life's example. While raising three children in St Clair, Michigan, and caring for her own mother, Joan put herself through school and obtained a master’s degree in Education. She taught elementary school in Marine City for many years. An avid reader, she could outplay anyone in the family at Scrabble or crosswords. Joan found a love of golf through the years, taught her grandchildren how to play, was a stickler for keeping score (but only for herself), and always walked the 18 holes. She also loved to knit, crochet, sew, embroider and paint. She made many items for family and for charity. She learned to quilt with her daughter, Anne. She had a great companionship with her beloved poodle, Maxwell, who guarded and loved her fiercely. During her younger years in life, Joan traveled much of the United States as well as trips to Tahiti, Israel, several cruises and Canada in the company of her family and friends. Joan still enjoyed traveling into her 90s seeing family in Michigan and Florida. Joan is survived by her children and their spouses: Anne (Bill), Alan (Peggi) and Christina (Jim). Her great delight was in her 7 grandchildren and 6 great grandchildren. Her picture collages of all the children (young and old) were hung prominently in every home she had. To everyone in the family she was Mom or Grandma Joan, but more importantly, she was the example for everyone to follow. She did so with a calmness and humility in the way she carried herself. She was always quick to lend an ear and a smile that could ease fears of what the day had brought. Never one to anger quickly, she did not dwell on the adversity of this world but led through example by swaying through the toughest of times and kept focused on being more productive with tomorrow, should it be given, because, she believed, every day was a gift. Funeral arrangements were made by Getz Funeral Home in Las Cruces, New Mexico, and by L.C. Friederichs and Son Funeral Home in St Clair, Michigan. Interment is pending in Hillside Cemetery in St Clair, Michigan. Memorial donations may be made in Joan's name to: Tutti Bambini Children's Charity 300 El Molino Blvd. Las Cruces, New Mexico 88005 Donations will be used to construct Little Libraries to place in neighborhoods for disadvantaged children. To leave the family a message of comfort please visit: www.lcfandson.com

Joan L. Starkey, age 101, passed away March 4, 2021 in the loving presence of her daughter Christina and the Lord. Born in Buffalo, New York to William and Phyllis Paine, the family, along with her brother Bill, moved to the metro Detroit area.... View Obituary & Service Information

The family of Joan L. Starkey created this Life Tributes page to make it easy to share your memories.

Send flowers to the Starkey family.