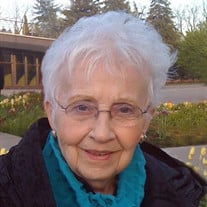 Janet Ellen Grace Sass passed away on April 13, 2018, in Castro Valley, California, where she resided since 2016. She was born in Detroit on July 3, 1921, to Jean B. and Charles W. Grace. Janet lived in Detroit, St. Clair, and Port Huron for almost all her adult life and moved to California in 2010. She majored in speech and debate at the University of Michigan, graduating in 1942, and began her career teaching language arts shortly thereafter. In 1946, Janet married lifelong St. Clair resident Leland I. Sass. Together, they raised four sons: David, Peter, Daniel, and Stephen. She is survived by her sons, her daughters-in-law, and her sons’ partners: Renee Sass, Peggy Sass, Cynthia Sass, Patrick Champagne, and David Mitchell. She delighted in her grandchildren Libby and Jared Sass, Carolyn Sass, Katelyn and Peter Morgan, Crystal and Matthew Sass; and great-grandchildren Taylor, Connor, and Noah Sass. Many students remember Mrs. Sass as a fine teacher at St. Clair Intermediate School. She taught English to hundreds of seventh and eighth graders through the years. In her retirement years, she was still an advocate for promoting literacy. As a lifelong Christian Scientist, Janet was a member of First Church of Christ, Scientist, in Port Huron and in 2011 joined First Church of Christ, Scientist, in Monrovia, California. Over many years she taught Sunday School and filled the roles of Board chair, Reader, and Lecture Committee chair. In 1985, she became a Christian Science practitioner to further the healing ministry of her church. Through her study of the Bible and through this caring spiritual practice, she brought healing to people in Michigan, Canada, California, and across the United States. A memorial service to celebrate her full life will be held at L.C. Friederichs and Son Funeral Home, St. Clair, at 1:00 p.m. on Friday, August 10. The family will welcome guests beginning at noon. Memorials honoring Janet G. Sass may be sent to the Fern Lodge Benevolence Fund, 18457 Madison Avenue, Castro Valley, CA 94546 or to the St. Clair County Literacy Project, St. Clair County Library, 210 McMorran Blvd., Port Huron, MI 48060.

Janet Ellen Grace Sass passed away on April 13, 2018, in Castro Valley, California, where she resided since 2016. She was born in Detroit on July 3, 1921, to Jean B. and Charles W. Grace. Janet lived in Detroit, St. Clair, and Port Huron for... View Obituary & Service Information

The family of Janet G. Sass created this Life Tributes page to make it easy to share your memories.

Send flowers to the Sass family.