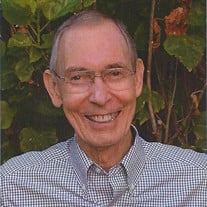 James E. Stewart, age 84, passed away July 12, 2019 in St. Clair, MI, surrounded by his family. The son of Stanley and Elizabeth (Turner) Melross, Jim was born in Honolulu, Territory of Hawaii and moved with his family to Mt. Clemens, Michigan at an early age. He married Mary Vernier and they had a loving marriage that spanned 62 years, the last 30 of which they spent in Naples, FL. Jim was a proud American who served as a flight instructor in the United States Marine Corps and achieved the rank of Captain. After the military, he received his B.S. in Business from Wayne State University in Detroit, MI and his MBA from Indiana University. He began his career in sales with Ferro Manufacturing in Detroit and retired as President of the Automotive Division of Johnson Controls. Jim was a true gentleman, a loyal friend and an adventurer. He achieved his goal of retiring early, which allowed him time to enjoy his many passions with his family, including sailing, tennis, golf and flying. A faithful Christian, Jim served as an Elder in the Presbyterian Chuch, both in Mt. Clemens and Naples, and most recently he was proud to be a part of the growth of Christ the King Church in Naples. Beloved husband of Mary (nee Vernier), dear father of Sarah (Stuart) Irwin of Bloomfield Hills, MI; Jane (Ronnie) Rombs of Ave Maria, FL; and James M. (Hallie) Stewart of Shaker Heights, OH and cherished grandfather of Tom, Connor, Tate and Kate Irwin, Samantha and Anna Howard, and Allison, Molly and James (Mac) Stewart. Brother to Anne (deceased), William, Jean and Douglas. The family appreciates gifts made in Jim’s memory to Christ the King Church, 3400 Radio Road, Suite 107, Naples FL 34104 or Hillsdale College, Attn: Donation Services, 33 East College St. Hillsdale, MI 49242

James E. Stewart, age 84, passed away July 12, 2019 in St. Clair, MI, surrounded by his family. The son of Stanley and Elizabeth (Turner) Melross, Jim was born in Honolulu, Territory of Hawaii and moved with his family to Mt. Clemens, Michigan... View Obituary & Service Information

The family of James E. Stewart created this Life Tributes page to make it easy to share your memories.

Send flowers to the Stewart family.