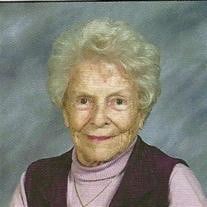 Helen "Virginia" Avison, passed away peacefully at home on May 24, 2012. Born in Pietrasanta, Italy, daughter of the late Paul and Helen McBride. Ginny was the great-granddaughter of Dennis McBride who captained the steamers Champion, Atlantic & Ocean built in Marine City by Eber Brock Ward around 1850. She always claimed that was the reason she fell in love with the River District and why she moved the family to the area from Birmingham, MI, in 1967. Ginny studied art at Pratt Institute and Parsons Schools of Design in New York. One of her early jobs was as a graphic artist in the advertising department of DePinna. There she met and married Lawrence B. Avison, Jr. on August 9, 1941. Her beloved Larry passed away on Sept. 6, 2007. Ginny was multi-talented to say the least. While in Birmingham she was a member of Christ Church Cranbrook & helped, with Larry, to put on the plays at St. Dunstan’s Guild. She did graphic design work for Dietrich’s Furs at that time & her drawings are still prized by the family. Later to get to know this area, she wrote a column for The Independent Press. She also wrote a gourmet column and her great pride, "The River District Cookbook". She went on to edit and illustrate "Life and Times in Early St. Clair" with Rosamunde Earle, an area historian. She was a long-standing member of the St. Clair Art Association where her beautiful watercolors were displayed and she was described as "an artist with panache." Ginny served fifteen years on the East China Planning Commission and five years on the East China School Board. In addition, she loved selling real estate for Robert Beauchamp and then Joe Joachim at Coldwell-Banker. Ginny was a member of St. Paul's Episcopal Church where she spent some time in the Thrift Shop and in the Sharing and Caring Mission, as well as being a member of the St. Clair Study Club. Her pride and joy were her children and grandchildren: daughter Virginia (the late David) Rank of Grass Lake, MI; son Lance (Judy) of St. Clair, son Christopher (Connie) of Grand Rapids, and grandsons Charles of Detroit, Curtis (Tiffany) of Holland, MI, and Patrick of Grand Rapids, as well as four great-grandchildren. She is also survived by special caregivers: Sue Paul, Tina Heydens, Leeanne Morelli, and Melanie Marlatt. A memorial service honoring Virginia and Larry will take place at 2 PM on Friday, June 1, in L.C. Friederichs & Son Funeral Home, St. Clair, with the Rev. Andrew Downs, of St. Paul's Episcopal, St. Clair, officiating. Visitation with the family will be from 11 AM -2 PM in the funeral home. Burial of their cremains will be at a later date in Rosehill Cemetery, East China. Memorials are suggested to the St. Clair Art Association.

Helen "Virginia" Avison, passed away peacefully at home on May 24, 2012. Born in Pietrasanta, Italy, daughter of the late Paul and Helen McBride. Ginny was the great-granddaughter of Dennis McBride who captained the steamers Champion, Atlantic... View Obituary & Service Information

The family of Mrs Helen Virginia Avison created this Life Tributes page to make it easy to share your memories.

Helen &quot;Virginia&quot; Avison, passed away peacefully at home on May...

Send flowers to the Avison family.