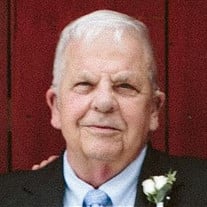 In his own words: Gerald L. “Jerry” Van Deusen was born in Hillsdale, Michigan, on July 1, 1930, raised and educated there. Though his siblings James (Marcia), Jack (Sue), Jon (Ginger), and Jill did not opt for a Hillsdale College education, Jerry can claim legacy status. His mother, Louise Moore, was a member of the class of 1928 and his uncle Henry Van Deusen graduated in 1915 with a Bachelor of Accounts degree. Jerry continued his education at the University of Michigan, earning his M.A. in 1956. He then continued with studies at Oak Ridge National Laboratories for Nuclear Studies. His first job was teaching biology at St. Clair (Michigan) High School. He continued there until his retirement in 1986. For four years, Jerry served as a United Methodist Pastor and then from 1994 for many years he served as a Missionary Church Pastor. On February 4, 1956, Jerry married his college sweetheart, Joan Kish. Together they raised three sons: Jeffrey (Jamie), John (partner Susan Van Oort), and James, who died in 1989. Jerry and Joan have five grandchildren: Christopher (Ania), Adam, Kathryn (John) LeMerise, Caroljean (Rich) Conrad, and James K., and one great-grandchild: Zosia Jadwiga VanDeusen. Among Jerry’s many interests are fishing, hunting, and photography. He is a certified Master Gardener. He enjoyed researching details of family history. He and Joan volunteered at a local soup kitchen. Of his travels, Jerry modestly states there is little to tell aside from travel to the Far East, courtesy of the U.S. Army. His travels included a trip to Seoul, Korea in 1970 when he accompanied two students to International Science Youth Day. A trip to Alaska in 2001 included a cruise, sightseeing excursion inland and an opportunity to visit family residing there. Most treasured travels for forty years have been the annual treks to the family cottage on the Bruce Peninsula in Ontario. A memorial service will be held at 11:00 a.m. on Saturday, June 16 at the First United Methodist Church, St. Clair. Visiting will be from 9:30 a.m. until time of service. Arrangements by L.C. Friederichs and Son Funeral Home, St. Clair. To leave the family a message of comfort please vist: www.lcfandson.com

In his own words: Gerald L. &#8220;Jerry&#8221; Van Deusen was born in Hillsdale, Michigan, on July 1, 1930, raised and educated there. Though his siblings James (Marcia), Jack (Sue), Jon (Ginger), and Jill did not opt for a Hillsdale College... View Obituary & Service Information

The family of Gerald L. VanDeusen created this Life Tributes page to make it easy to share your memories.

In his own words:

Send flowers to the VanDeusen family.