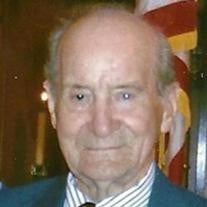 The Honorable Gerald M. Emig, 95, went home to be with the Lord, and to meet his beloved wife, Aileta, on Friday, August 3, 2012, after a short illness. He was a retired Lt. Colonel in the US Army. Gerald (“Gerry”) was born on November 5, 1916, in St. Clair, the son of the late Isabelle Shaw-Emig. He graduated from St. Clair High School in 1934 and played on the SCHS state runner-up basketball team, and enjoyed caddying with his brother, Ron, at the St. Clair River Country Club. The sport of golf became an important part of his life. He worked for the Diamond Crystal Salt Company as Sales Manager in Detroit, prior to WWII and for a short-time thereafter. Gerry valiantly served his country in the U.S. Army Corps of Engineers during WWII having been the first person drafted from St. Clair. He served in the Pacific arena in Okinawa helping to build airport runways, and participated in the invasion of Saipan. He was cited for gallantry during wartime, and retired from the U.S. Army Reserves achieving the rank of Lt. Colonel. Shortly after his return from the War, Gerry began a real estate career with his brother, Ron, in the Detroit area. But longing for his beloved community of St. Clair, and the beauty of the St. Clair River, he returned to St. Clair to establish his own real estate and insurance business in 1952 and marry Aileta. He proudly served the St. Clair community as a Justice of the Peace for 17 years. He was a loyal member of the St. Clair Rotary Club, and proudly served as Club president, from 1962-63, and was a Paul Harris Fellow. He proudly served on numerous Boards at various times including the St. Clair Foundation, St. Clair County Board of Realtors, East China School Board, and many others. Gerry was actively involved in the St. Clair business community and was pleased that he assisted the city in purchasing the former Baptist Church site for conversion to the St. Clair Museum. He was especially honored to have been selected as the Grand Marshall for St. Clair’s Sesquicentennial parade. Gerry was a member of the St. Clair First United Methodist Church, and served on numerous church committees throughout his life, enjoyed singing in the men’s chorus, and sincerely cherished the many friendships of his church family. He was a member of the Pine Shores Golf Club, and to this day, continues to hold the course record for Pine Shores’ nine holes. He was delighted to be asked recently to be the honorary starter for the Blue Water Area Junior Golf Tournament. Gerry also had won several championship flights at the St. Clair River Country Club in the 60’s. He was a volunteer at River District Hospital, and thanks to the hospital’s nomination, Gerry was honored as a “Golden Oldie” by the YMCA of Metro Detroit and the Detroit Rotary Club recognizing his outstanding community service. He was a devoted husband to Aileta, and visited her every night for almost seven years while she was an AFC resident, and he enjoyed playing his harmonica for many of the residents; Aileta preceded him in death in 2007. He is survived by his daughter and son-in-law, Michele and Ronald Hall, Tacoma, WA; a son, Gerald S. Emig, Grand Rapids; three grandchildren, Heather Emig, St. Clair; Lauren Emig, Grand Rapids; and Jerry D. Emig, East Lansing; a great grandchild, Addelynn; a brother-in-law, George Evans, Banning, California; and several nieces and nephews. He is also survived by dear friends and neighbors, Dann and Joanne Seibel; long-time dear friend and Army-buddy, Jim Hall, St. Clair; and primary caregiver and treasured friend, Theresa LaParl. He was preceded in death by his wife; his brother and sister-in-law, Ron and Ruth Emig; sister, Margaret Balfour; brothers-in-law and sisters-in-law, G.C. and Gwendolyn Graf; Cliff & Helen Smith; and sisters-in-law, Mary Evans and Beverly Evans. Cremation has taken place. In lieu of flowers, donations may be made to: the St. Clair First United Methodist Church; St. Clair Historical Museum; the St. Clair Junior Golf Tournament; or the St. Clair Foundation. A memorial service will be held on Saturday, August 11, at 1 pm, at the St. Clair First United Methodist Church. Arrangements by L.C.Friederichs & Son Funeral Home

The Honorable Gerald M. Emig, 95, went home to be with the Lord, and to meet his beloved wife, Aileta, on Friday, August 3, 2012, after a short illness. He was a retired Lt. Colonel in the US Army. Gerald (“Gerry”) was born on November 5,... View Obituary & Service Information

The family of Mr Gerald M Emig created this Life Tributes page to make it easy to share your memories.

Send flowers to the Emig family.