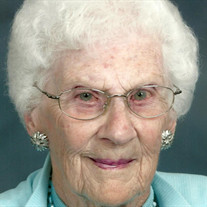 Genevieve Margaret Schwartz, age 103, of St.Clair, died Monday, June 22, 2015. She was born March 16, 1912, in St. Clair, the last surviving of 13 children born to the late Frank and Matilda Westrick. Genevieve married Eugene Schwartz and he preceded her in death in 1961. She retired from East China Schools in 1974. Genevieve a member of St. Mary’s Catholic Church, the League of Catholic Women and the D of I. She enjoyed baking and was the best cookie maker, and would walk 5 miles a day rain or shine. Her passion was her family. She is survived by her son; Patrick, daughters; Susan (Tim) Armstrong and Barbara (Dave) Goodenough, her grandchildren; Michael (Julie) Armstrong, Timothy (Jessica) Armstrong, Kristen (Scott) Bond, Kelly Wulbrecht, Todd (Dawn) Goodenough and Troy Goodenough, great- grandchildren; Cody, Todd and Ryan Armstrong, Alec and Sydney Bond, Noah Wulbrecht and Lyndsay, Kathryn and Emily Goodenough and many nieces and nephews. Visitation in the L.C. Friederichs & Son Funeral Home, Thursday from 4-8 PM. In state Friday at St. Mary’s Catholic Church from 10 AM until 11 Am when mass will be said. Burial in Mt. Hope Cemetery, Port Huron. In lieu of flowers memorials may be Made to the St. Mary’s Organ Fund. Arrangements by L.C. Friederichs & Son, www.lcfandson.com

The family of Genevieve M Schwartz created this Life Tributes page to make it easy to share your memories.

Send flowers to the Schwartz family.