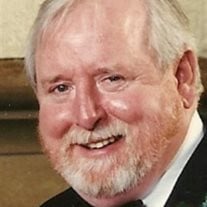 Former Michigan State Senator Edward J. Robinson, of St. Clair, Michigan, formerly Dearborn, Michigan passed away on January 16, 2014. Son of the late Dominic Edward and Mary Ann Robinson (nee Douherty). He married Rose Marie “Teddi” Robinson (nee Kirchner) on May 28th, 1960 at St. Anne Catholic Church in Cleveland Hts, OH. Champion of the underdog, He was thinking of others up to his final days. He wrote in his book, “While The Eagle Sleeps” that his opinions and philosophies on life were a product of his life experiences, which included growing up in a large Irish Catholic family and meeting Henry Ford in his youth, later working at Ford Motor Company. He graduated from Sacred Heart High in Dearborn where excelling in academics and sports and was class president his junior and senior years. He attended the University of Notre Dame, where he was active in acting, sports and debate, receiving awards for Oratory and Best Collegiate Male Actor. Receiving a Bachelor’s degree in economics, he ran as the youngest candidate for Mayor of Dearborn at the age of 21. He then entered the Marines where he served as a Lieutenant for 3 years and 5 years in the Reserves. He later attended the Detroit College of Law while campaigning and was elected to the State Senate as representative for Dearborn. While a State Senator, he served on the Appropriations committee and became lifelong friends with former Detroit Mayor Colman A. Young, He was proud of his achievements in legislating mandatory newborn testing for Phenylketonuria (PKU) into law paving the way for newborn testing requirements saving the lives of countless individuals. He was a tireless political activist and campaigner for the Democratic party but when he felt the other party had the right stuff, he was there to support them . He was a lifelong advocate for philanthropic endeavors, active at Most Holy Trinity Church in Detroit, serving as Executive Director of Community Affiars for the Catholic Archdiocese of Detroit and was Director of the Metropolitan Detroit Citizens Development Authority. His business, political and philanthropic career was impressive to say the least, but his greatest pride and achievement in life were lifelong friends and a family that he loved and was proud of in all their achievements small and large. He is survived by his wife Teddi, daughter Rachel (Walt) Pustulka and grandson Jason, son Ryan (Kathy) Robinson and grandchildren Kaitlin, Ryan, Clare, Molly and Jack, and son John (Lynn) Robinson and grandchildren Ben and Betsy. He is also survived by sisters Janice Wietecha and Margaret Wehring, many in-laws, nieces and nephews and countless friends. He is preceeded in death by his sisters Alma Muir, Arline Winowiecki, Bernadine Robinson and brother Goldwyn Robinson. The wake will be on Sunday, January 19, 2014 from 1:00 to 6:00 PM at L.C. Friederichs & Son Funeral Home in St. Clair. In state Monday at St. Mary’s Catholic Church, St. Clair from 10 AM till mass at 11 AM. Memorials may be made in Ed’s name to Most Holy Trinity , 1050 Porter, Detroit, MI 48226. Arran

The family of Mr Edward J Robinson created this Life Tributes page to make it easy to share your memories.

Send flowers to the Robinson family.