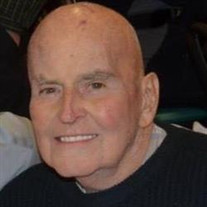 Edward Kindsvater, age 79, of St.Clair, passed away November 10, 2014. He was born on September 17, 1935 to the late Victor and Vera Kindsvater in St.Clair. He married Susan Turke on July 27, 1957 in St. Clair. She preceded him in death on February 6, 2012. He served his country with the U.S. Navy during the Korean War. He was a member of St. Mary's Catholic Church, St.Clair. He also belonged to American Legion Post 382, St.Clair and was a third degree member of Msgr. Kromemnaker Council, K of C, St. Clair. He worked for many years as a police officer for the city of St. Clair. After his departure from the police force he worked for MichCon and retired from there after many years of service. He was also a volunteer firefighter in the city of St. Clair and belonged to the Special Police of St.Clair. He is survived by his children; Debra Sue Schilling, Edward "Butch" Kindsvater, Jr. ( Annamarie Mazzola), Sandra (Mike) Siler, Karen (Russ) Bassett, David ( Patricia) Kindsvater. He is also survived by his grandchildren; Crystal (Jeff) Baker, Joshua (Kristine) Schilling, Meghan Kindsvater, Edward "Jordan" Kindsvater, Brian (Meghan) Siler, Ashley Siler, Brad Siler, Sean Kindsvater, Austin Bassett and Kyle Bassett. great-grandchildren; Antonia Grace, Abrielle Hope, Aviana, Jeffery, Jediah, Joziah, Alizah Baker and Arina Hoffman, brother; Robert (Julie) Kindsvater. A funeral mass will be held at 12:00 p.m. on Saturday at St. Mary's Catholic Church, St.Clair. Interment will follow at St. Mary's Cemetery. Visiting hours will be Friday from 2:00 to 4:00 p.m. and 6:00 to 9:00 p.m. and Saturday from 11:00 a.m. to 12:00 p.m. at church prior to the service. A rosary will be said at 7:00 p.m. Friday evening. Grandsons will serve as pallbearers. Memorials may be given to the following; St. Mary's Cemetery Fund, St. Clair Firefighters Inc., Richmond Church of God- Haiti Fund. To leave the family a message of comfort please visit:www.youngcolonial.com

Edward Kindsvater, age 79, of St.Clair, passed away November 10, 2014. He was born on September 17, 1935 to the late Victor and Vera Kindsvater in St.Clair. He married Susan Turke on July 27, 1957 in St. Clair. She preceded him in death on February... View Obituary & Service Information

The family of Edward Kindsvater Sr. created this Life Tributes page to make it easy to share your memories.

Send flowers to the Kindsvater family.