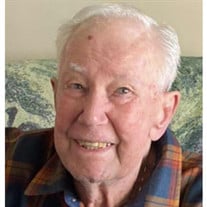 Donald J. Fleury, age 85 and a lifelong resident of St. Clair, passed away peacefully surrounded by family on May 23, 2021. Don was born on April 22, 1936 to the late Chester and Marguerite Fleury. He was preceded in death by his brother Mert (Janet) Fleury and sister Doris (Perry) Westrick. Don was a graduate of St. Clair High School, class of 1954. He was a gifted athlete who excelled at baseball and football. He proudly served his country as a member of the United States Marines. Don married Nancy Mehlberg on January 5, 1957 who preceded him in death on August 8, 2010. Don and Nancy were friends as kids growing up and that friendship continued to grow through school. That special bond turned into 53 years of marriage. Don took a great deal of pride in being a volunteer fireman for St. Clair for over 30 years. He also served his city as a councilman in the 1970's under Mayor Doc Gerrits. He was an active member at Immanuel Lutheran Church serving as an usher and also enjoyed assisting with their annual sauerkraut dinner. He retired from AAA as an insurance agent in 1990. He was blessed with a long retirement where he enjoyed annual hunting trips to the family cabin in Mio. Don also loved golf and especially cherished going to his grandchildren's sporting events. Don is survived by his children, Jeff (Debbie) Fleury, Sandee (Keith) Golembiewski, Todd (Mary) Fleury; grandchildren, Tracie (Paul) Stockwell, Lindsay (Justin) Britz, Kevin (Meghan) Fleury, Heather Golembiewski, Krisdee (Nick) Cataldo, Zach (Carly) Golembiewski, Drew and Conner Fleury; great grandchildren, Haylee, Cole, Grant and Nolan Stockwell, Cody and Jake Britz, Jackson Cataldo, and Mason Golembiewski. He also leaves behind many dear nieces and nephews, neighbors and friends, especially Bev Schuman and her family. A funeral service will be held Friday, May 28th at 11:00 a.m. at Immanuel Lutheran Church, St. Clair. Visitation will be Thursday, May 27th from 2:00-8:00 p.m. at L.C. Friederichs and Son Funeral Home, St. Clair. As well as one hour prior to the service at the church on Friday. A Fireman pass and review will be conducted Thursday at 7:00 p.m. Interment will be at Hillside Cemetery, St. Clair where military honors will be conducted. Memorials are suggested to Blue Water Hospice and the American Cancer Society. To leave a message of comfort visit www.lcfandson.com

Donald J. Fleury, age 85 and a lifelong resident of St. Clair, passed away peacefully surrounded by family on May 23, 2021. Don was born on April 22, 1936 to the late Chester and Marguerite Fleury. He was preceded in death by his brother Mert... View Obituary & Service Information

The family of Donald J. Fleury created this Life Tributes page to make it easy to share your memories.

Send flowers to the Fleury family.