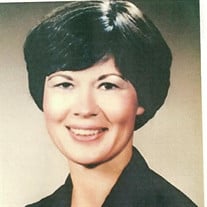 Crystal Wery Willett, 76, of The Villages, Florida, died peacefully on October 8, 2014 surrounded by family. Born in 1938, Crystal grew up in a very modest home on the family farm in Wilson, Michigan. Crystal completed high school in three years graduating from Cedar Lake Academy in 1955. She then moved to Takoma Park, Maryland to enroll in the nursing school at Columbia Union College and graduated in 1959 with a Bachelor of Science in Nursing. Prior to retiring to The Villages in 2003, she lived in Kettering, Ohio where she worked for most of her nursing career at Kettering Medical Center. Her love for friends, flowers, cooking and baking, decorating, and entertaining could only be out done by the love she had for her husband, sons, daughters-in-law, grandchildren, and nursing career. Her faith in God and her Savior Jesus Christ never wavered even after fighting a long and hard battle against cancer and kidney failure. Her radiant smile was a source of joy to all who knew and loved her. She will be greatly missed. She was predeceased in death by her parents, Levi M. Wery and Blossom Davis DePas. She is survived by her loving husband of 55 years, Robert L. Willett; sons Jesse (Shana) Willett, and Greg (Terri) Willett; grandchildren Robby, Maggie, Arthur, and Andrew; and brother Jim (Ginny) Wery. The family extends their gratitude to the doctors and staff at Florida Hospital Orlando for their excellent and compassionate care. Funeral services will be on Monday, October 20, at the L. C. Friederich's Funeral Home: 214 Trumbull Street, St. Clair, Michigan. Visitation will start at 12:30 pm and the service will begin at 1:30 pm. Burial will follow at the Rosehill Cemetary in East China, Michigan. In lieu of flowers, memorial contributions can be made to The National Kidney Foundation, 30 East 33rd Street, New York, New York 10016.

The family of Crystal Mae Wery Willett created this Life Tributes page to make it easy to share your memories.

Send flowers to the Willett family.