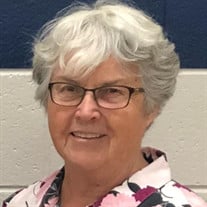 Colleen Ann Gilin (Breitner), age 79, of St. Clair, passed away unexpectedly on February 17, 2021. She was born in Monroe, MI on November 12, 1941 to the late Ralph and Margaret Breitner. Colleen was raised in Ida, MI where she graduated high school in 1959. Following high school, at age 17, she went on to the University of Detroit where she earned her Bachelor's and Master’s Degree. Colleen's 40 years of teaching were divided between both high school and college level education. On August 22, 1964 she married the love of her life, Michael Gilin. Colleen was a member of the Eastside Tennis Club as well as the YMCA. In her spare time Colleen took delight in fine literature. She lived a very active lifestyle and enjoyed playing tennis, swimming, and biking. Growing up on a farm, Colleen quickly became attached to animals. Her love for animals was something that she carried with her throughout her life. Above all, Colleen cherished the time she spent with her family, especially her grandchildren. She would always attend their concerts and sporting events. She is survived by her husband of 56 years, Michael Gilin; children, Dr. Sean (Darci) Gilin, Shannon (John) Bebb; grandchildren, Mollie, Ben, Brendan, Audrie, Maggie; brother, Jim Breitner, as well as several special family members and friends. She is preceded in death by her brother, Mark Breitner. A funeral mass will be held for the public to attend on Tuesday, February 23rd at 1:30 p.m. at St. Mary’s Catholic Church, St. Clair. Private visitation arrangements have been made with L.C. Friederichs and Son Funeral Home, St. Clair. Interment will be at St. Mary's Cemetery, St. Clair. Memorial contributions are suggested to St. Clair County Humane Society or the University of Detroit Mercy. To leave a message of comfort visit www.lcfandson.com

Colleen Ann Gilin (Breitner), age 79, of St. Clair, passed away unexpectedly on February 17, 2021. She was born in Monroe, MI on November 12, 1941 to the late Ralph and Margaret Breitner. Colleen was raised in Ida, MI where she graduated high... View Obituary & Service Information

The family of Colleen Ann Gilin (Breitner) created this Life Tributes page to make it easy to share your memories.