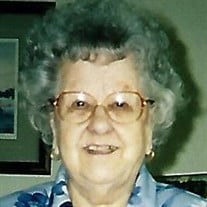 Catherine “Kay” Richardson, age 96, of Port Huron, passed away July 16, 2018. She was born in Detroit on May 26, 1922 to the late Robert and Jennie Carpenter. She was very proud of the fact that her father and two brothers were Detroit police officers. She graduated with honors from Redford High School in 1939 and attended Graceland College. On December 27, 1947 she married a WWII Merchant Marine and Great Lakes sailor, Ted Richardson. He preceded her in death on March 22, 2000. Together they raised their family in St. Clair. She was a lifelong member of the Reorganized Church of Jesus Christ of Latter Day Saints and Community of Christ Church. She was baptized in 1939 and called to the priesthood as an Elder in June of 1988. She worked as an Executive Secretary and Assistant Office Manager at the Diamond Crystal Salt Company in St. Clair for many years retiring in 1982. Kay enjoyed many things throughout her life. She had a passion for knitting and made baby booties by the hundreds which she happily gave to family, friends and those in need. She also enjoyed cats, dogs, reading, traveling and of course her time spent with her family. She had a love of lighthouses and Great Lakes ships as well. She volunteered doing many things with Meals on Wheels, Heart Association, River District Hospital, teaching English to foreigners, and Huron Lightship Museum. She is survived by her children; son; Terry (Connie) Richardson, daughter; Suzanne Richardson and her husband; Peter George. She is also survived by her grandchildren; Adrian (Justin) Balyeat, Erin (Brent) Klein, Amy (Drew) Vistisen, Jade Richardson, Peter (Jeanine) George, Patrick (Ellen) George and seven great-grandchildren. She was preceded in death by brothers; Robert, Norman, Kenneth, and Richard and sister; Harriet. A memorial service will be held at 1:00 p.m. on Saturday, August 4 at L.C. Friederichs and Son Funeral Home, St. Clair. The family will receive visitors from 10:30 a.m. until time of service. To leave the family a message of comfort please visit: www.lcfandson

The family of Catherine "Kay" Richardson created this Life Tributes page to make it easy to share your memories.

Send flowers to the Richardson family.