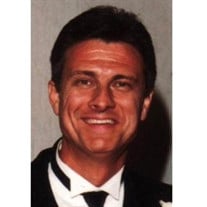 Bill McCumby, 72, died unexpectedly Tuesday, June 22, after a twelve year battle with Parkinson’s Disease. He was born October 24, 1948 to Nelson and Leona McCumby in Lansing, Michigan. He is survived by his wife, Ellen, son, Mark (Kelly) of Grand Rapids, Michigan; daughter, Jill (Matt) of St. Clair, Michigan; grandchildren Jacob and Connor McCumby and Ryan, Colin, and Ashlyn Zimmer; sisters Janice Wilson of Haslett, Michigan; Lorraine (John) Cain of Perrysburg, Ohio; and Ellie Round of Traverse City, Michigan; brother-in-law Bill Sauber Georgetown, Texas; sister-in-law Joanne Stein (Bill) St. Clair, Michigan; brother-in-law John Sauber (Paula) Shelby Township, Michigan and many nieces and nephews. He was preceded in death by his parents and brother, Lloyd. He attended East Lansing High School where he was a standout athlete in both Football and Baseball graduating in 1966. While attending Ferris State College, he was affiliated with Lambda Chi Alpha and enlisted in, and successfully completed, the United States Marine Corp. Platoon Leaders Class Officer Training Program. While at Ferris, he met and began dating Ellen Sauber until they were married in 1968. He was Honorably Discharged from the United States Marine Corp. in 1969 and then attended Michigan State University, graduating in 1972 with a Bachelor of Science Degree in Criminal Justice with High Honor. After jobs with Ford and Colgate-Palmolive, his focus on a career in automotive sales led him to settle with his family in St.Clair. During a long and successful career, he worked for Hardware Springs, Atwood Automotive, Blue Water Plastics and Magna International. After more than 20 years at Magna, he retired in 2009 as the Senior Vice President of Sales for Closures. He balanced his work life by being active in the lives of his friends and family, lifting weights, playing in local softball leagues and riding his Harley. Over the years, in addition to his own pursuits, he would be seen at local sports fields and venues watching and cheering for his children and grandchildren in their sporting events. Always a fan of St.Clair sports and his beloved Spartans of Michigan State University, he more recently became a fan of Michigan baseball! His easy personality and smile, sense of humor and genuine interest in the lives of others will be missed by all who knew and loved him. Visitation will be held at L.C. Friederichs & Son Funeral Home in St. Clair on Sunday, June 27th from 2:00 p.m. to 8:00 p.m. Additional visitation will be held on Monday, June 28th at 10:00 a.m. at L.C. Friederichs & Son Funeral Home with Service at 11:00 a.m. Burial to follow at Rose Hill Cemetery in East China Township. In lieu of flowers donations would be appreciated to Michigan Parkinson Foundation or the Kirk Gibson Foundation for Parkinson’s

Bill McCumby, 72, died unexpectedly Tuesday, June 22, after a twelve year battle with Parkinson&#8217;s Disease. He was born October 24, 1948 to Nelson and Leona McCumby in Lansing, Michigan. He is survived by his wife, Ellen, son, Mark (Kelly)... View Obituary & Service Information

The family of Bill McCumby created this Life Tributes page to make it easy to share your memories.

Send flowers to the McCumby family.