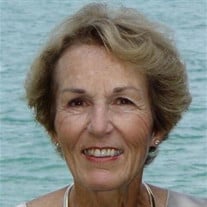 Ardis Tate Hirt, of St. Clair, passed away on November 19, 2018. Ardis was born on May 1, 1936, in Erie, Pennsylvania to James Harrison Tate, MD, and Helen Stover Tate. Ardis grew up in Erie, attended McDowell High School, Bradford Junior College and The University of Michigan, from which she received her BA in 1958. While at U of M, where she was a member of Delta Gamma Sorority, she met Stanley Hirt, a student at the U of M Law School. Ardis and Stan were married in Erie on August 16, 1958, and recently celebrated their 60th wedding anniversary. After Stan's graduation from Law School, they moved to Mount Clemens, where Stan practiced law for over fifty years. In 1993, they moved to St. Clair, where they enjoyed busy summers and quiet winters at Orchard Beach on the St. Clair River. Ardis was active in the parents' organizations at her children's schools. She enjoyed walking, skiing, needlepoint and knitting (especially baby sweaters), traveling to Europe, Argentina and Mexico, golfing at the St. Clair Golf Club, and bridge, at which she excelled. She was an outstanding homemaker and gardener. Ardis and Stan raised their children together in Mount Clemens, with summers at the family cottage at Orchard Beach, where she enjoyed being surrounded with children and grandchildren. Ardis is survived by her husband Stan, son Brian (Florencia Attademo) of Asuncion, Paraguay, son Jay (Erika Garcia) of Chicago, Illinois, and daughter Andra Hirt Starshak (Michael) of Glenview, Illinois. Also five grandchildren: Hayley Starshak, Michael Starshak, III (Trey), William Starshak, Julia Hirt, and Sean Hirt. Also survived by her brothers, Jay Tate (Sandra Best) of Hilton Head Island, SC, and Gary Tate of Henderson, NV, and several nieces and nephews. The family thanks and acknowledges the outstanding care provided to Ardis by the Visiting Nurse Association of Port Huron at Blue Water Hospice Home and asks that contributions in memory of Ardis be made to the Blue Water Hospice Home, 2795 Edison Dr. Marysville, MI 48040. Cremation has taken place under the auspices of the L.C. Friederichs and Son Funeral Home, St. Clair. A gathering of family and friends to celebrate Ardis' life will take place at a later date. To leave the family a message of comfort please visit: www.lcfandson.com

The family of Ardis Hirt created this Life Tributes page to make it easy to share your memories.

Send flowers to the Hirt family.