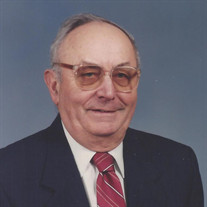 Andrew Sadlowski, age 101 of China Twp., passed away on March 1, 2020. He celebrated his centennial birthday on January 28, 2019. Andrew was born to the late Walter Sr. and Josephine (Zychski) Sadlowski. He married Stella (Haligowski) on April 28, 1945. She preceded him in death in 2014. Andy retired from Chris Craft Corporation after 41 years of service. He was an active area farmer for most of his life. Andy was a member of St. Mary’s Catholic Church, where he ushered for over 50 years. He was a member of the St. Clair Knights of Columbus, Council #2251. Andrew was also an active member of the Futuristic Club for over 70 years. He was an avid Detroit Tiger fan. Andy also enjoyed traveling, which included trips to Florida, Hawaii and casino bus trips. He enjoyed playing euchre with friends and in tournaments, pinochle, bingo and gardening, especially raising and selling sweet corn. Andy is survived by his children, Mary (John) Winterbauer and Richard “Dick” Sadlowski (Susan Page); grandchildren, Dawn (Thomas) Stackpoole, Steven (Kimberly) Arndt, Kelle (Thomas) Vertin, Mindy (Eric) Arndt, Richard Sadlowski and John (Cathy) Winterbauer; eight great grandchildren; sisters in law, Kathleen Haligowski and Evelyn Sadlowski and many loving nephews and nieces. He was preceded in death by brothers and their wives, Raymond (Katherine), Walter (Shirley), Anthony (Irene) and Norbert and granddaughter, Marcy Arndt. A special thank you to Alger Mahn, Jerry Sadlowski, Bob Weber, staff at Mallards Landing and Heartland for all the special acts of kindness and care to Andy. A Funeral Mass will be held Saturday March 7th at 11:00 a.m. at St. Mary’s Catholic Church, St. Clair. Interment will be in Rosehill Cemetery. Visitation is Friday March 6th from 3:00 to 8:00 p.m. at L.C. Friederichs and Son Funeral Home, St. Clair. A Scripture Service will be Friday at 7:00 p.m. Additional visitation Saturday 10:30 to 11:00 a.m. at church prior to mass. In lieu of flowers memorials may be made to K of C Council #2251 or St. Vincent de Paul. To leave a message of comfort visit www.lcfandson.com

Andrew Sadlowski, age 101 of China Twp., passed away on March 1, 2020. He celebrated his centennial birthday on January 28, 2019. Andrew was born to the late Walter Sr. and Josephine (Zychski) Sadlowski. He married Stella (Haligowski) on April... View Obituary & Service Information

The family of Andrew Sadlowski created this Life Tributes page to make it easy to share your memories.

Andrew Sadlowski, age 101 of China Twp., passed away on March...

Send flowers to the Sadlowski family.